I visited the Pantanos de Villa Wildlife Refuge in the Chorrillos district of Lima a while back. It was lovely. I would like to burn one there someday.

But this article is about what I saw at the end of the visit. 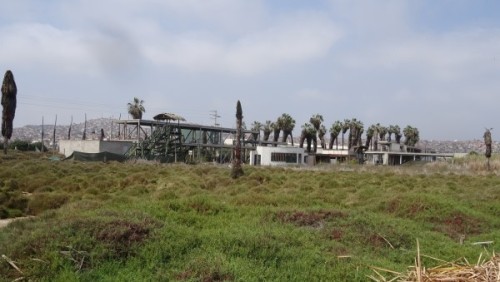 I saw this clapped out, abandoned structure seen from the Laguna Genesis. It’s actually located on the street coming in from the avenue just before the admissions office.

At first I speculated that it must be from decades ago due to how rusted out it is. A building that looks like that, which there are many of in the American Midwest, would date back to the 80s. I thought it was some state-planned brainchild from when the government controlled fishing. 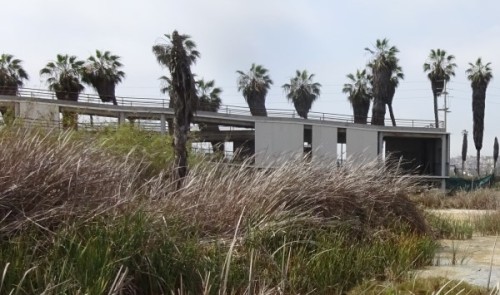 But Gerry, being from a seaside city in Dublin, countered that being near the salt water advances oxidation. He guessed that this particular shithole was less than 10 years old.

Our debate was settled when a park employee came along. He told us that Gerry’s right, it was just built in 2013 and subsequently abandoned. It was supposed to be a new tourism center and administration office for the park, as Gerry had also surmised. But now it’s an “obra paralizada” (paralyzed construction), which in Peru means a project that was caught up in red tape and indefinitely shelved.

I asked for more details. What was the problem? He explained that the municipal government of Chorrillos was going to build a small soccer stadium not far from one of the freshwater tributaries of the refuge. Because it would have contaminated the water, the park service lodged a formal protest and ultimately blocked the construction of the stadium.

Then, as explained by the park employee, the municipal government of Chorrillos took revenge on the pesky park service by using its own regulatory and bureaucratic weapons to block the construction in its district of the fancy new tourism center for Pantanos de Villa. A few million dollars were spent on what was already begun, and a few million more were paid out to the contractor by the national government as compensation for not completing the job. It’s a multimillion-dollar shithole.

I did not apply a journalistic degree of independent verification of the park employee’s story. In other words, I didn’t call the Chorrillos municipal government to ask for comment. But I did find that the park and concerned conservationists did in fact block the construction of a soccer stadium to protect the refuge.

That article identifies a culprit in Chorrillos district mayor Augusto Miyashiro Yamashiro, who has been in office since 1999 (!) and is nicknamed “The Mute.” Former military school, corruption investigations, member of the Fujimori political party. All the trappings of a political boss.

I pondered the political logic of blocking that park tourism center. It must’ve gone like this: “Who gives a shit about international tourists pouring into the district to see the birds? These tree-huggers fucked with me, they need to be taught a lesson!”

So this is already an episode of petty politics which make Chris Christie’s bridge closure look like an ill-informed faux pas. It’s a tremendous waste of government money that produced a rusting shithole in the middle of a national park. But it’s not the icing on the cake.

Before we spotted the clapped-out shithole and heard the story, we went to the Laguna Marvilla near the beach. You have to walk south down a country road that enters a gated community, which we thought a little odd.

But even more surprising was the sign indicating that we had entered Santiago de Surco, the upper-class district located at least three miles away. I knew there was a border dispute between the Surco and Chorrillos districts, but that was in, around and including the giant San Pedro Cemetery (renamed by the Chorrillos municipal government “Cemetery of Chorrillos”).

See the map above to see how this little gated community, if considered Surco, is a tiny island separated from their city hall by three miles of Chorrillos.

Except for a tiny part of old Surco which is a little dodgy, Santiago de Surco is an upper-class district home to the U.S. embassy, Alejandro Toledo’s (seized) home and office and the infamous Wall of Shame. On the other hand, besides an area of nice properties near Barranco along the beach, Chorrillos is a sprawling district home to shantytowns and poverty.

The gated community was somewhat nice, I’d say upper-middle at least, so I guess the residents prefer to be legally incorporated in Surco, even if they’re mostly surrounded by Chorrillos shitholes. This is a nugget of political pettiness on the part of this spiteful beachfront community, but a tangent from the real point here.

Back to the rusting shithole in Pantanos de Villa … I only remembered all this border dispute between the two districts because we saw this sign as we were leaving the park and walking toward the avenue to hail a taxi.

MESSAGE TO THE PUBLIC

La Encantada, Las Brisas de Villa, Huertos de Villa and San Juan Bautista neighborhoods are located in CHORRILLOS. Whoever considers themselves Surco residents can sell their land and buy somewhere in Surco to fulfill their dreams.

This is already among the tackiest use of public resources I’ve ever seen. Not just the time, thought and labor needed to erect this sign, but the real icing on the cake is that the sign is located directly in front of the rusted-out shithole that the Chorrillos municipal government blocked from being completed. 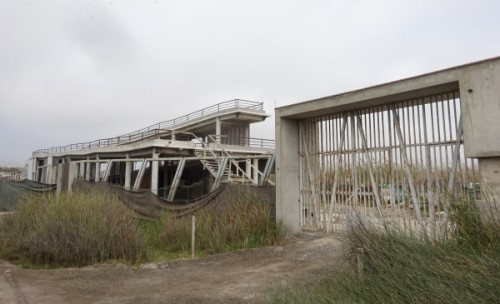 It’s so perfect. I couldn’t make this up.

“You are in Chorrillos and we are a shithole, as evidenced by the rusted-out shithole you drive by every day. If you don’t like being a part of our shithole district, you can get out!”

Chorrillos: Why We Can’t Have Nice Things

So instead of the big fancy tourism center, the gringo birders wearing safari hats, binoculars and expensive cameras are received in the old Pantanos de Villa office, pictured above. 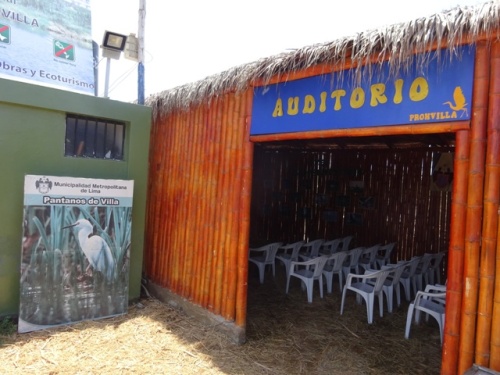 And the busloads of schoolchildren on field trips can enjoy educational sessions before their tour in this little hut.