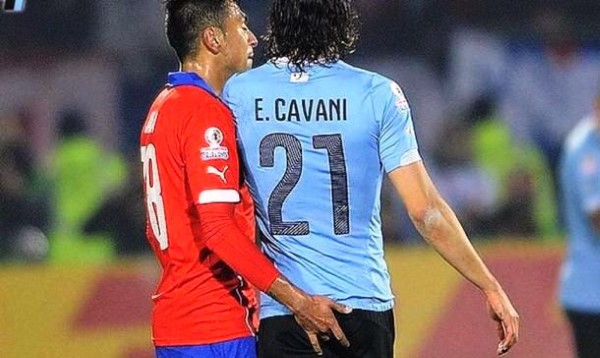 Longtime readers know what I think of soccer is nothing new, but I present a new point in this article: soccer undermines functional athleticism.

Now the anecdote that inspired this article.

I was in a crowded Lima park / plaza with my son. He approached a small group of boys aged nine to 13 when two parents arrived with their son and a volleyball.

The parents’ son knew the boys and recruited them to play with the volleyball. Before I could even assess the skill level of the parents, another family’s friendly dog started to chase the volleyball.

The family and the gang of boys ended up playing a brief game of what we called “keep away” back in grade school. But they weren’t bumping or volleying the ball, they were throwing it. Of course the random running compelled my toddler to run among them aimlessly. So I had to watch.

I imagine my jaw dropped at watching this group of Peruvians try to keep a light, soft, bouncy ball away from a medium-sized dog. Inept does not do the incompetence justice.

I had seen South American men throw a ball before (“like a girl” as we say in the States), but this may have been worse. One boy threw it double underhanded, or “granny style” in American basketball slang.

But it was not just the lack of throwing ability. Throwing and catching were lost on this crowd, and the dog got closer with every pass.

Then the ball came to one of the younger boys who is a mainstay in the gang. I see this boy almost every day at this park. While the neighborhood is middle class, I assume he is poor by his worn clothes and the fact that his parents are never with him. He is also an excellent soccer player (an indication he is in the streets every day all day).

So, maybe from the granny pass, the ball landed near this soccer-playing boy. He approached the ball and, to my disbelief, planted his left foot and took a big, exaggerated right step to plant his right foot in a way that blocked the walking path to the ball. As if his physical presence in that space immediately nullified anybody’s aggressive move into that same space.

The dog went through his legs and bit the ball, popping it and ending both keep-away and volleyball practice.

The group’s failure to keep a volleyball away from a dog inspired this article.

I thought about what that episode would have looked like among a group of my cohorts at the ages of nine to 12. It would have been too boring to watch.

Our keep-away-from-the-dog would have been what we call “playing catch,” the most basic warm-up drill in baseball. Two (or three or four) players stand ten yards or so apart and throw a ball back and forth. You throw the ball hard (not so hard you’re straining) and accurately aimed at your teammate’s head. Not only would any observer been bored, the dog would have given up its pursuit.

We would have had to make it easier for the dog to keep its interest, in which case we would have played 500. More commonly played with an American football but can be played with any kind of ball or even a frisbee, a thrower spaces himself out from several catchers by at least 30 yards and as many as 50, depending on the throwers’ age and strength.

The thrower launches the ball as high as he can toward the crowd of catchers and calls out a random number, which serves as the number of points a successful reception earns for the catcher. As the name implies, the first catcher with 500 points wins. But a dog wouldn’t have a chance in 500 either because there would always be a crowd of boys to catch the ball higher than the dog can, American boys being competent at catching and all.

While these two examples mention baseball and American football, the result would have been the same with boys who play basketball or hockey and thus have the minimum levels of strength and coordination in their arms to keep a ball away from a dog.

Soccer harms functional athleticism precisely because it prohibits the use of man’s most functional extremity: the HANDS.

The feet are used to run and jump. Learning to play soccer well improves no functional skill I can think of, except maybe kicking the head of somebody who is already on the ground – a useless and antisocial thing to do.

Soccer’s utility is further harmed by the idea that nobody can touch you or even come remotely close in case you fall to the ground and feign agony to draw a penalty. This boy tried to defend the ball by turning his back to his opponent (the dog) in a relaxed stance!

I have noticed some of the bad habits of soccer in my basketball experience in South America. Granted it’s not a problem at the advanced level, but in the medium and scrub games of Latin America feature appallingly bad defense.

I attribute the poor defense in Latin American basketball to soccer. I am sure it is with good reason in that sport, but defenders in soccer generally give their opponents several feet of free reign and wait them to move first.

In basketball a defender is constantly bothering the attacker, even if he doesn’t have the ball, and if the attacker pauses with the ball it’s common to swarm him or to pop the ball out of his hands. In what were certainly not advanced players in the few soccer games I have played in on small urban courts, I scored plenty of steals because the players aren’t used to aggressive defenders.

Now for my ever-present disclaimers.

One of the central tenets of CrossFit, the world authority in “functional” training, is “regularly learn and play new sports.”

I am not saying a little soccer will harm your functional fitness. In fact, soccer players are clearly among the best athletes for endurance and cardiovascular health. They run several miles in one game – not slow marathon running but miles punctuated by sprints and lateral movements as well.

As my good friend Charles says, “Soccer rule #1: there are no fat people in soccer.” The peak and subsequent retirement of a professional soccer player is significantly younger than any other sport I know, including the intensely athletic sport of boxing.

Note: In defense of my good friend, Charles played in the St. Louis suburban north high school league, in which he says the rules enforced for physical contact were much more like hockey.

Soccer is great if mixed with other sports and physical activities. It’s better than nothing, but playing only soccer, as is the norm in Latin America, and especially the “fulbito” and “canchitas” variants played on a basketball court in which the players burn about as many calories as in a volleyball game, undermines functional athleticism.

The Keep Away from the Dog incident occurred months ago. I was finally inspired to write this article while watching Peru lose to Chile in a World Cup qualifier tonight.

I have to cover Peruvian soccer for the latest venture, Peru Reports. I enjoy watching the highlights on YouTube, and you would never guess I think soccer is a girl’s sport if you read all the articles on the Peru Reports soccer tag.

And while I do feel some excitement for Peru’s national selection, I always and inevitably get frustrated if I have to watch a whole game.

Tonight got started when Peru midfielder Christian Cueva drew a red card. After his opponent stopped a rising ball with his hand, Cueva in a moment of frustration lightly threw the ball at the Chilean’s head (in what in basketball is known as a “chest pass”).

While Cueva’s soccer arms probably lack the strength to throw the ball hard enough to cause any blunt trauma or even a stinging pain on the skin, the emotional damage knocked the Chilean pussy on to the ground as he clutched his head in agony. Cueva was booted from the game and Peru ultimately lost their bid for the 2018 World Cup.

But I did not stop watching the game yet.

I stopped when Peruvian star Yordy Reyna took a dive. His Chilean opponent had done what I believe is called a “tackle” in soccer, diving with his feet first toward the ball. But his feet went much higher than the ball in what looked like an attempt to trip Reyna up.

However the athletic Reyna jumped over the Chilean’s attempted obstruction. Instead of keeping after the ball, which in all honesty the obstruction may have prevented, Reyna defaulted to acting and feigned injury to one of his feet.

The replay not only showed there was no contact, but that he was limping on the wrong foot from the one he landed on. There could not have been an injury, yet the game came to a stop while everybody waited for Reyna to recover.

I couldn’t take anymore. I started writing this article.

There is no justifying the acting in soccer. The incentives are out of whack. There is much to gain and really nothing to lose, aside from masculine pride of course, in feigning injury.

What happens in basketball and hockey is not the same. First of all, it doesn’t happen nearly as much because the risk of giving up a basket or goal is much higher. Second, and those inclined to dislike the United States and American culture can chalk this up to our naive optimism and sense of fair play, the NBA took immediate action when “flopping” became a problem by releasing a video and implementing a policy to call fouls on players who act. The video called out the worst offenders.

In the combat and collision sports (MMA, boxing, American football, hockey), acting is important to deceive opponents about an injury. Some fighters will stick their tongue out or smile after taking a shot to the head in order to dishearten their opponent. And a quarterback is as good as finished if the defensive line knows what hurts.

But acting for opponents is different. Acting for the ref, who in soccer has Godlike powers, is anti-athletic.

What’s new? Soccer came out of the closet years ago.

The fact that soccer is about as macho as volleyball wasn’t news to Expat Chronicles readers. But it seems the rest of the world still doesn’t know.

Soccer is great for girls. In fact, women’s soccer features the most attractive athletes of any sport in my opinion. They all have legs and butt, and they’re constantly running around which shakes their upper bodies up and down …