I recently learned of the 2013 murder of Canadian expat, Brad Deering, in Costa Rica.

According to the Costa Rican tabloid, Diario Extra:

Three masked men gagged the security guard and his rottweiler to break into a party of friends during early Thursday morning, and killed the owner of a luxurious home in Pozos de Santa Ana with four bullets. The deceased was identified as Canadian national, Brad Deering (42).

Apparently three men, two women, and Deering were partying in the living room, some naked and others in light clothing, when suddenly the group of criminals entered with their faces covered. The attackers tied everybody up.

One watched over the group of friends. Another tried to disconnect the security cameras in the two-story mansion. A third man with a gun 9mm searched for jewelry, money, and other valuables.

During those moments of tension, the managed to escape the house naked and ran through the middle of the street. A neighbor came out to see what was happening.

The innocent woman thought the thief to be a security guard and told him where Deering, who she believed to be a thief, was hidden in the backyard. Deering had come to a fence that prevented him from escaping. His fate was sealed. The killer hunted him down and put four bullets in him.

Then the murderer returned to the apartment to gather his two accomplices and they fled in a vehicle while the group of friends tried to break free and call for help. After several hours, one of them (a Colombian national) managed to escape and call the police.

At first the killing was believed to be a botched robbery. But in short time more details emerged.

From this CTV news article:

Brad Deering was found shot in the head Thursday, naked and handcuffed, in a neighbour’s yard in Escazú, southeast of Santa Ana, in what a Costa Rican investigator called a standard home invasion.

Now, increasing evidence suggests the 42-year-old may have been targeted by a disgruntled investor in a deal gone wrong.

“The standard home invasion theory just doesn’t seem to add up or measure up in this particular case,” said private investigator Doug Smith, who has worked in Costa Rica for 10 years.

Deering had been living in the country for about eight years and may have had a target on his back after allegedly scamming investors on pharmaceutical deals and phony gold futures, according to Smith, who is not formerly working on the case.

From this Vancouver Sun story:

Brad Deering, 42, and three others were inside his gated community home in San Jose Thursday morning, when three men stormed the house, shot and killed Deering, and tied up the others.

According to [private investigator] Smith, three men dressed as security personnel fooled a guard outside Deering’s home into letting them in by claiming they were there to fix an alarm system.

They tied up the guard, crashed Deering’s home, tied up three of the four people inside while Deering tried to escape, but the intruders ultimately shot Deering three times.

“A home invasion usually is at night and they crash the doors, crash the gates and … most of the time in home invasions they wait for people not to be there,” said Smith. “In this case they went in prepared, tied people up in broad daylight.”

From the anonymous source who tipped me about Deering:

Brad Deering in Costa Rica was a tough kid. Mixed martial arts, and he could defend himself. His problem was that even after more than 10 years here he never learned to speak Spanish well. He would drive around downtown in a fucking Lotus. He wore Rolex watches and Gucci shoes. He was a flashy guy, dated bimbo models. He was out and about a lot, always making a scene.

Brad put about $700K cash into the house he built for himself and his girlfriend. He had a fireproof racing suit. He liked to run race cars at the track here in La Guacima. One day Brad and his girl took off for a long weekend on San Andres. When he came back, he found that his house had been robbed. They pulled the fucking safes right out of the wall, took the TVs, about $40K in cash, etc. I knew that he had some bad debts, and the collection efforts were not over.

About a month later, he and a pal had some hookers over for an all-night party. They were snorting away until about 8:30 in the morning when Colombians dressed as local police broke into the house. They handcuffed everybody. Brad broke free, busted down the door and ran out into the street screaming for help. Fucking neighbors wouldn’t let him in. The Colombians put two right in his head and left him bare ass naked.

Sure, Brad was a swindler and a player. If you kept him at arms length he was a lot of laughs. Unfortunately, he burned about 300 people in one shot on a call center deal that went bad, and the payback was indeed a bitch.

The Diario Extra article mentioned the Lotus plus a black Porsche Cayenne and a red Audi TT.

From a forum thread on Deering’s death:

I knew Brad for a few years. He was a nice enough guy, but he was allergic to an honest buck. As long as I knew him, he was either doing sweepstakes scams, phony gold or silver futures, or selling his home for the 800th time. He went into every ‘business’ deal knowing the other side would be cheated as an end game.

Last year, in his place in Santa Ana, some guys paid him a visit and tried to abduct him, beating him in the process. The snatch was botched when he managed to get out of the car, tied up and bleeding in front of the neighbors. Same scenario, luxury car driven by the assailants. Apparently, this time he took more than a beating’s worth from someone that wasn’t willing to let it go. Not helping matters, Brad’s facebook page was full of exotic vacations and lavish living at the expense of those whom he did ‘business’ with.

As I said, Brad was a friendly guy, always insisting on picking up the tab. But whatever he was into is what brought those assassins to the door that day.

From this Costa Rican Times article:

The one thing you are not hearing in Costa Rica nor in Canada is an outcry of people saying that Brad was an upstanding citizen and that this incident came out of no where … This was not someone that made any friends when it comes to business since his arrival in Costa Rica.

The life of Brad Deering in Costa Rica has been marked by him being involved in scam after scam. These range from fake gold futures to fake oil deals to online pharmacies that did not ship and project. Each step along the way Brad scammed people for their money (hard earned or not) and continued to accrue debts to investors in his businesses. It was well known that he had made quite a few enemies during his extended time in Costa Rica, some even resulting in violent altercations.

Scams are run each and everyday in Costa Rica. They range from real estate to commodities to sweepstakes scams. They are run in Costa Rica because in most cases the SEC and Costa Rican authorities have a hard time tracking the money involved in these fraudulent schemes. But there is a pretty well know rule……do not flaunt it and keep low key. This rule was not followed at all by Brad Deering.

Brad showed off his spending habits on facebook and in real life. Expensive cars, prostitutes, drugs. His “friends” were bottom of the barrel scum as well. Brad had gotten to a point where he thought he would get away with this life forever…

This a guy that was in the business of screwing over people and it finally caught up to him after 8 years in Costa Rica.

In the same vein as Noah Goldberg and John Rowley, Deering lived too fast a life to sustain in Latin America. John Rowley was robbing anybody and everybody, including other criminals and killers, in 1990s Colombia. That’s obviously a short-term plan. It doesn’t seem Noah Goldberg was robbing people or engaging in anything illegal besides snorting coke. But he acted like a gangster and threatened people’s lives, which won’t go very far in Medellin. Deering’s folly was robbing people for huge amounts of money. While a six-figure scammer in the United States most likely faces jail, in Latin America the penalty is death (unless you’re a politician, which he wasn’t).

From Brad Deering’s public Facebook photos it looks like he wore expensive clothes to the gym, even a special outfit to play tennis in. Click the link for more shots of luxury, leisure, and musclebound selfies. 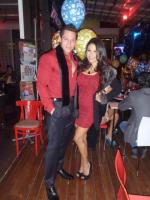 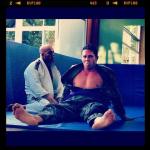 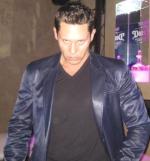