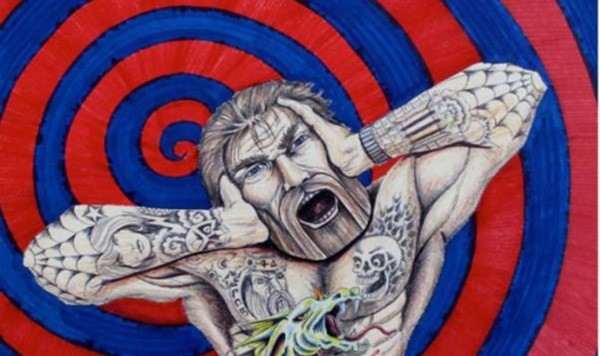 This is an excerpt from Smuggler’s Diary: Cocaine Karma by Kendall X, the best book I’ve read on Colombia’s underworld. ‘Kendall’ was busted for cocaine in Cali in the 1970s and did time in various Colombian prisons, starting in Cali’s Villanueva Prison.

This is one of a few Smuggler’s Diary excerpts I’m publishing to promote The Mick‘s memoir. See the Kickstarter campaign for This Mick’s Life: Addiction and Underworld from Ireland to Colombia.

Calavera waved me over quickly to the pasillo door and pointed to a fight in progress. A convict had wrestled another to the ground on the 2nd-floor landing only a few feet away. The one with the knife had chased the other convict up the stairwell and had tackled him before I’d gotten there. He was stabbing him in a frenzy wherever he could when I arrived. I felt safe in my cage looking on as if I were watching a movie. Guards charged up the stairwell with their batons in hand but none approached Frenzy. A baton was never a deterrent to someone with a knife. The guards formed a loose ring around the fighters and shouted at Frenzy to stop. Meanwhile, Frenzy rolled the other one over and stabbed him twice more in the chest leaving the knife in the body where the heart should’ve been. Frenzy stood up and was duly marched down the stairwell and onto the main corridor where we could hear the guards beating him. I couldn’t believe what I’d just witnessed. I’d just seen my first man killed only inches away from me – or so I’d thought for 5 years.

{Footnote: Back to La Picota, beginning of 1979. Two Patios were allowed to play soccer against each other out on the main yard on rare occasions. Those that wanted to play or watch from the two Patios were searched, counted and marched orderly double-file to the soccer field. Patio 1 was pitted against Patio 5 – the Patio for the criminally insane. I was out on the soccer field walking laps and enjoying the sunshine, fresh air and open spaces when one spectator from el Patio de los locos waved me over. He was halfheartedly watching the match as I approached. He gave me his hand and introduced himself.

“Maybe you remember me, hermano? You know, in Villanueva.”

“You know, John, one night I got stabbed right in front of your pasillo. I saw you there standing behind the door.”

“Yes, of course, I remember,” I exclaimed in disbelief, “but I thought you were killed that night!”

I was stunned. The first person I’d ever seen murdered was there resurrected, and after 5 years had passed, we were meeting formally. He had seen my name and picture in the numerous articles about me before I’d arrived at Villanueva. Even so, how he’d remembered seeing me standing behind a barred door while being stabbed to death was truly bizarre.

“I was stabbed 18 times that night, hermano,” he bragged, “that makes 43 times altogether now!”

I’d never heard of a prisoner who’d been stabbed so many times and was still around to talk about it. He then went into great detail elaborating upon the little scar-slits covering his body. And the finer points about each fight where he’d stabbed and killed others. He’d told these stories many times so the tales had been filled with plenty of details and humor. I declined to look at the three scars on his butt; I thought it might look unseemly if he were to show me his ass out there on the yard.

Our encounter was brief, quite pleasant and a lot more interesting than the soccer match going on was. And I wondered, What had he done to provoke so many men into turning him into a human pincushion.}

I watched the guy bleeding on the landing floor and thought just how cheap life was there and how easily its spark could be snuffed out. One guard pulled the knife out of what I thought was a corpse. A few guards came over to check the weapon out and were more interested in where it might have been made than the guy bleeding to death on the floor. His eyes were still open but were unblinking so he appeared dead. They eventually got it together to haul the body down the stairwell.

Only a few in the pasillo even bothered to come to the pasillo door to see it. I was the only one standing there when they removed the body. I felt self-conscious having stayed to watch the drama through its entirety. Everyone else appeared blasé. I misunderstood their apathy until I was to arrive there shortly myself. It wasn’t that they’d seen it so many times that they’d become inured to it; no not at all, it was just that they’d seen and experienced it enough times to find it appalling.

Pedro filled me in on the dirt. The two were old-time enemies. They both worked in the factory making cardboard boxes. They’d worked overtime that night and the commander had been escorting them to their pasillos for lockup when Frenzy had attacked the other in the stairwell. This stairwell was infamous for this kind of attack because it was difficult to get away if cornered there.