I house my family in a three-bedroom, two-bathroom apartment in Lima’s Lince district. In the States we would call it a “townhouse,” with a ground-level entrance leading up to the second-floor apartment and a third-floor roof.

I fell in love with the place because of the rooftop patio.

On the roof are one of the bedrooms and one of the bathrooms, each tiny and called “cuarto de servicio” and “baño de servicio.” I translate that to “slave quarters” because it’s meant for a live-in maidservant. 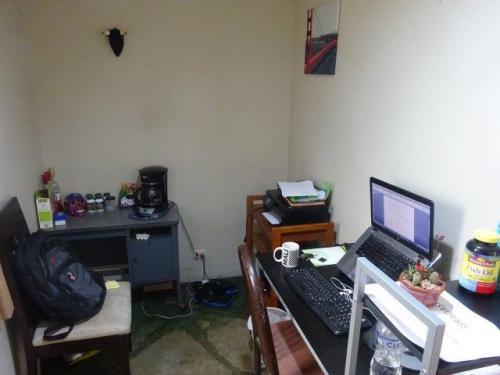 I converted the slave quarters into my office. 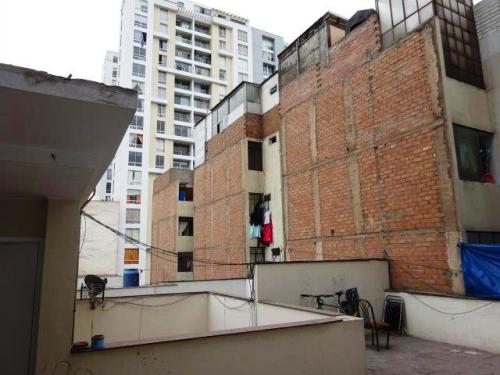 So I work up on the roof all day, and occasionally the children come up to play. The roof also serves as the drinking spot when friends come over. The men drink upstairs while the children run around, and we leave the women downstairs. One of my most reliable drinking buddies, and the father of my boy’s best friend, lives in that 15-story building seen here.

Behind us is a modern eight-story building, which thankfully positioned its bathrooms against my wall, acting as a privacy fence from some 30 or so apartment windows. Note the landlord’s lame ass pictures, relocated from the living room.

It doesn’t have the best view, but I love my roof. 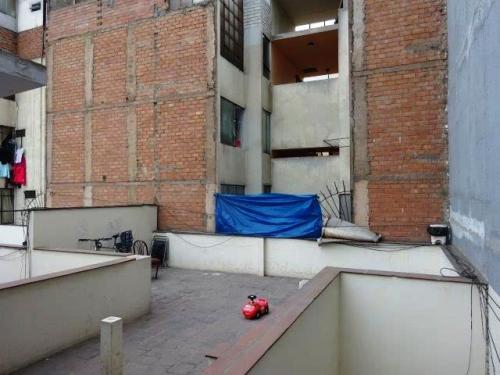 A couple months ago I started finding discarded foodstuff on my beloved roof, at the back toward the apartment complex staircase. The first time I think it was an unopened package of cookies. Another time it was a packaged cake. Then a banana.

Around that time we did some extensive traveling and I forgot about it. We came back after a month in the States, and there was an accumulation of rotting food on my roof.

I realized it must be coming from one of the little brats in the apartment complex. I see them congregating in the staircase sometimes when I’m drinking and listening to music, or popping off pushups and pull-ups (rooftop ledge) and blasting Iggy Pop or Migos (as opposed to Peruvians playing Latin music or played-out shit like The Beatles).

I always ignored them, but now something had to be done.

I first wrote an email to my landlord, who owns all the townhouses in our quinta. I explained what happened and asked if she knew anybody in the apartments behind us. She responded that she would immediately send a notarized letter and file a complaint with city hall.

Whoa, slow down, I replied. I’m sure we can take care of this without going that far.

That night one of the aging hipster dikes from downstairs (who sometimes play English music as unique as Bob Marley, but their Spanish music is nice) came to complain about food being thrown on their patio. Each of the two first-floor apartments has a small patio which looks up at a narrow patch of sky. Two of these patios are sandwiched in between my and the second-floor neighbor’s rooftop patios. She thought our children were throwing the food. 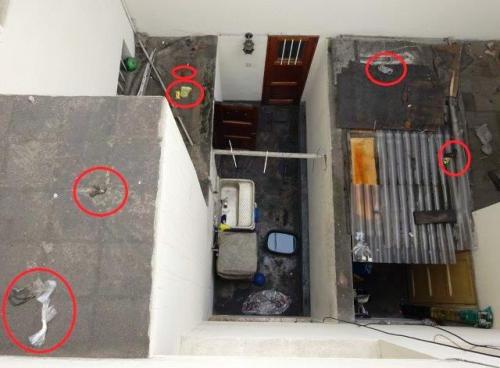 The next day I looked down and saw that several pieces of trash had landed on ledges and such, out of reach for a simple cleanup. Bananas were rotting. There was probably bread before, but the pigeons would have snatched that up. The aging hipster dikes didn’t even know about the stranded trash.

Say, that explains why we had a fuckin pigeon nest somewhere between our roofs a couple months ago!

The next day wife went by the entrance of the apartment complex, which is not a building but a complex. There are at least 10 of these staircases in the five-story complex, so more than 100 total apartments separated by courtyards. It’s not a bad place to live for small families of modest means. The exteriors within the complex have fresh paint, as opposed to the Lima-ubiquitous brick facing my rooftop patio.

There are two “guachimans” (watchmen) for the complex, and wife finds the one at the entrance closest to our roof. After identifying which staircase it is, the watchman tells her which of those apartments have children. There are two aged five and seven on the third floor (same level as our roof) on the left side from our vantage point, and there is a 10-year-old on the fifth floor of the right side.

We knew it had to be coming from one of two apartments on the right side because of where the shit always lands. We also knew it wasn’t from the third floor because my ever-suspicious wife had hung a tarp to block the view of the nosy children, but it only blocked their most direct view from the third floor.

Since there were no children on the fourth floor, wife used the complex intercom to call the fifth-floor apartment. A woman answered and denied that her child was throwing trash on our roof. She blamed it on the younger children on the third floor, and hung up.

Granted, I do not assume wife was very polite during the conversation, but I do believe the woman dismissed her out of hand and abruptly hung up.

So wife then called the third-floor apartment home to five- and seven-year-old children, and from which one would have to do a bit of an extended-arm hook shot in order to successfully discard food onto our roof. That parent also denied that her children were discarding the trash, and blamed it on the child in the fifth-floor apartment. Then hung up.

Neither of these parents confronted their children. Not even curious. Both of them rejected the possibility out of hand that their children were throwing the trash.

My hypothesis, which of course is correct, is that all the little brats are doing it together, from the fifth-floor roof.

That night the non-aging-hipster-dike neighbor came by to report after visiting the watchman. It seems she arrived after my wife did, because he told her to get pictures. Fucking pictures!

As a naïve gringo I was beside myself. Life down here never stops surprising you. Suffice to say that if my child was doing something clearly wrong and terrorizing the neighbors, I would come down on him and it would stop. One talk. With these neighbors, it’s like a knee-jerk defense at all costs, as if the child will be banished or executed if found guilty.

I wondered if the landlord was right. Maybe I should have gone straight for the notarized letter and formal complaint with the city. Wife shook her head at me like, “Duhhh … obviously.”

But I wasn’t going to give up on common decency just yet. So I went and took fuckin pictures and typed up a fuckin letter. Because the pen is mightier than the sword!

Read my letter with pics (Spanish). The money shot was the circled trash from before, but the above (Paint ninja) shot makes it clear who’s responsible. I included the fact that one of the deposits was a bag containing a cheese sandwich with a letter which said, “Quieren pan? Tomen.” That should tell the dude that his 10-year-old is involved. Because five-year-olds and seven-year-olds in Latin America can’t write.

I also included my full name, phone number and address. That’s the balls-out gringo touch. I think most people would leave some anonymous pussy shit.

I printed it off, put it in an envelope and walked around the block to the apartment complex. The guachiman had heard the story before, but he seemed to have a more accommodating tone before a 220-pound gringo, as opposed to the little ladies of before. I asked for the name of the father and apartment number of the fifth-floor apartment home to the 10-year-old.

I got his first name and apartment number, and I addressed the envelope as you would in the States. I left the envelope, thanked the watchman and was on my way.

The next day, no food or trash discarded. Another day went by with no trash. And another.

I gloated to my wife that we didn’t have to go to the authorities to stop a child from littering on our roof. We can treat our neighbors with respect and live together in harmony. And then the next day there was litter.

It was a plastic bag of bread with a small bit of chicken, and a snail munching away. I took a picture of it all, then put the food and snail back in the bag and launched it back up to the fifth-floor roof.

And I typed up another letter. 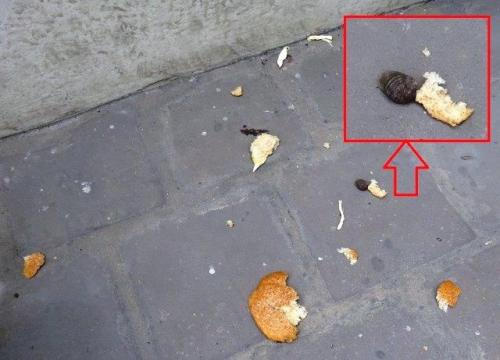 It included the above Paint masterpiece, and the warning: “This is the last informal letter I’m going to send. If this happens again and I don’t hear anything from you, the next step will be legal.”

That night I went by to get the street address, which I had forgotten. A different watchman was talking on his cell phone, some 10 yards behind the open gate. Signaling with his hand for me to wait. Wait? Motherfucker!

So I come inside the gate a step and examine the lists posted to the wall, one of them indicates who is current and who is late in paying administration fees, electricity, etc. Each apartment lists the full name of each occupant. So while this dickhead watchman is making me wait, I get nosy on his tenants and locate the fifth-floor apartment number and copy down the father’s full name, not just his first name. Something to add into the letter, maybe give him a spook. Then I see the full address and leave the watchman to his phone.

That was two weeks ago, and nothing has fallen to the roof since.

So maybe you don’t have to enter litigation to get a child to stop littering on your roof. That redeemed Peruvian parenting a little.

But I’m ready for the next step. If more shit comes down I’m going to confront the little bastards on the staircase, one at a time if I have to. If he won’t be a father, I will.

In my mean voice, in honor of B-Mac.

Hopefully it doesn’t go that far.