Ever since Peru beat Ecuador in Quito, the country’s gone mad for the possibility that the national selection might qualify for the World Cup for the first time since 1982. The big game came last night against Argentina. My children’s daycare told everyone to dress in Peru shirts, and everyone in the neighborhood did. It was all anybody talked about, and I’ll say that one advantage international soccer has over American sports is the vibe. The players aren’t from somewhere else. They’re all Peruvian, and they’re fighting for glory.

And like always, I felt cheated, disappointed. And again I ask myself, “Why the fuck am I watching soccer?”

There are two main difficulties for heterosexual men to watch soccer: (1) lack of action and (2) dudes falling down and writhing in pain when they weren’t hit.

The biggest problem with soccer is the lack of action. Compared to America’s major sports, soccer is by far the longest with 90 minutes of playing time. Meanwhile, it has the least scoring, also by far. I understand the attraction of a slow buildup and the enhanced thrill of finally scoring, but many games have no goals at all (like last night), or just one goal in 90 minutes.

So the most important proposals to improve soccer look to increase the action and reduce the dullness. But some proposals are needed to address the flopping problem. It is well documented; even The Economist has weighed in.

It’s one thing to sit through 90 minutes of little action, but soccer adds insult to injury by constantly featuring players falling to the ground and writhing in agony. Many times the replay shows they weren’t even touched, and for whatever reason the fans of soccer worldwide don’t mind. It’s so common you don’t need to search Google or YouTube for examples. It’s in every game. Just tune in to whoever is playing tonight, you’ll see it.

Soccer is the world’s most popular sport and its management, given all the money they’re making, could probably care less what an ugly American like I think of it. But tastes in sport change and there’s nothing to say it will always be the most popular. Basketball is exploding in Europe and Latin America. American football is growing in Brazil. Baseball certainly has a foothold in Latin America and hockey, well, you need natural ice if you’re going to compete with Canada. Of the commonwealth sports, rugby is getting very popular in America and beyond. If soccer is going to maintain its position, it may want to think about the kind of sports fan who isn’t accustomed to watching games designed for women and children.

So here are my proposals to make soccer a little better.

The large field and relatively slow-moving players (they can’t really sprint if they can’t pick up the ball) make for a game with few shots on goal. But the other constraint which keeps scoring low is that each team has a player who is allowed to defend the goal with his hands. And these goalies usually get one or two balls which would have gone in otherwise.

So I say take away the hands privilege. Basketball has a rule preventing goaltending. One criticism of basketball is that there is too much scoring, but soccer doesn’t have to worry about that.

Without goalies, teams may keep a player back to defend the goal. We don’t know how the game would adjust, but attackers will certainly take more shots, more wild shots from afar, and of course there will certainly be more goals. 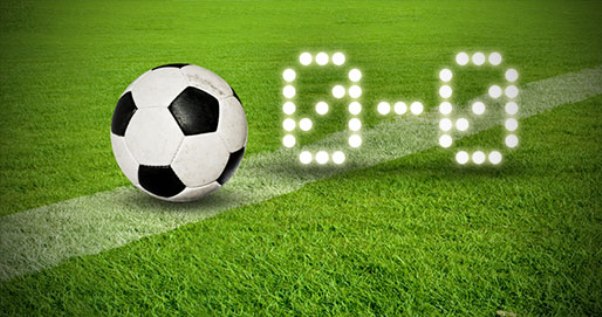 The current CONMEBOL standings show that, of the 85 World Cup qualifier games played in FIFA’s South American division, there have been 20 ties (TWENTY!). That’s 24% of games ending with no winner or loser. And of course I’d bet that more than half if not two thirds of those ties were 0-0 or 1-1. According to the site I ripped the pic from, between 5% and 10% of soccer games end in scoreless ties.

In the event of a game not allowing a tie, the penalty-kick shootout is dramatic but the action is pretty low. The one goalie doesn’t really have a chance to stop a kick going into the huge goal behind him. For most shootouts, you’re basically watching to see which team WON’T score on a shot. And that’s almost always determined by the player missing the goal entirely, because the goalie almost never stops a shot on goal.

Instead of penalty kicks, soccer should implement hockey-style, high-pressure power plays where one team plays with a strong advantage over the other. But taking away one soccer player isn’t enough. That happens with every red card and I wouldn’t call what follows a “power play.”

In hockey, losing a player is 20% of your skating team. So maybe 10 on eight, but I think you have to clear out all those people in front of the goal to increase scoring chances. I would think six on five or seven on six for three or four minutes, but whatever dynamic makes it an extremely dangerous situation for the shorthanded team, but not impossible to defend. Each team takes turns on the power play for one full round. Repeat as many (or as few) rounds as needed until one team wins.

Now it’s time to check the general pussy-ness of soccer, and the aggravating scenes of players falling down and crying in agony. Obviously the refs need to call fouls when they’re faking, but the problem is so bad that wouldn’t be enough. The incentives are very skewed toward drawing calls, so let’s address the incentives.

I propose a limit to how long a player can be on ground. If he’s lying down or rolling around for more than five seconds (0:05), he has to go sit down. Maybe change the rules to allow players to come back after being subbed out, but if they run the risk of sitting until the next available sub time I bet they’ll be hopping up as quick as they fall down.

If you’re not going to force players off when they act hurt, then they’ll be falling all over the place anyway. Why not make soccer a full-contact sport? Maybe a rule should prohibit no hands but allow shoulder-to-shoulder and hip checks to add some action and grit to the game, and reduce the flopping. Of course anything goes with the legs, but direct kicking shouldn’t be allowed.

If body-checking is allowed, as in hockey, you’re going to have to allow fighting too. Hockey’s finesse players who excel at scoring would become targets for injury for the bigger, stronger defensemen if each team didn’t have “enforcers” whose only job on the ice is to physically intimidate those big, strong defensemen by checking them and, if necessary, dropping their gloves and initiating a fist fight.

Fighting comes with a five-minute penalty in hockey. Nothing to say that wouldn’t work in soccer.

All of the Above

No goalies, no ties, power-play tiebreakers, mandatory substitutions, body checking and fighting – that would be bad ass!

For all the shit I talk about soccer, my hometown is actually a hotbed in the United States. The local Jesuit school won 10 college championships from 1959 to 1973. I actually thought soccer was a respectable sport before moving to Latin America, and from an athletics standpoint I still do. I had friends on my college team.

But as I explain to Americans, down here soccer is baseball, football, basketball and hockey combined. It’s on everywhere, all the time. There is nothing else. And there are always scoreless ties and flopping. So maybe I’m a little sore, since I can’t escape it. Since then I’ve written the following pieces:

Is Soccer a Gay Sport?