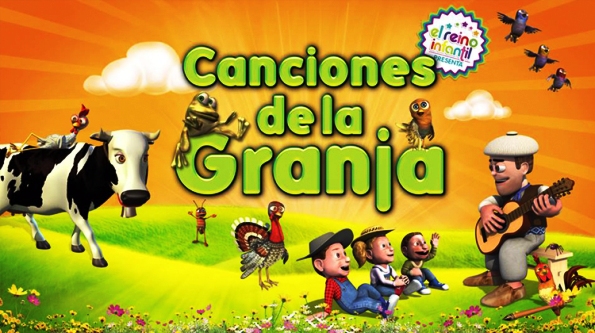 I was thinking about the last time I did a Spanish-language playlist on this blog, and I couldn’t remember.

The reggaeton consumption has dropped to about zero since getting married. I have a couple potentials in Peruvian chicha or criolla, but the first idea that came to mind was children’s music. I listen to so much I could turn out a list while I wait for delivery.

One future theme on this blog will be my efforts and experience in raising bilingual children. Being in Latin America where the children interact in Spanish except when with me, it’s obviously important to emphasize English whenever possible. For bicultural families in the United States or Europe, it’s the opposite.

The boy was starting to speak all Spanish until I put my foot down and bought a smart TV, which connects to YouTube so he can watch Thomas and Friends in English. The language of Shakespeare is still at a disadvantage, but now it’s not so lopsided.

Music plays an important role in teaching language. If you live in Latin America, your all-in-one English-language songs channel is Super Simple Songs.

If I wanted to be a Nazi, I would never play the Spanish songs below. But Spanish songs for children offer something English songs don’t: ENERGY. Old MacDonald, Itsy Bitsy Spider and Wheels on the Bus are all boring. And while the Super Simple Songs are unbelievably educational and entertaining for children, they’re so obnoxious you may come to think bilingual children are overrated and call the whole thing off.

Spanish-language children’s songs, on the other hand, are exceedingly tolerable and high-energy for dancing and LOUDLY singing along. That’s why they get regular play despite my language goals. In short, they’re more fun.

This song is for babies. It got stuck in my head when I heard wife singing it when the boy was less than a year old. It was so memorable that I looked up the lyrics, learned the entire version including a few lines she didn’t know and ultimately found the YouTube video.

There is also a cartoon titled Pulgarcito, so this was a pain in the ass to find. Until I found it that is and it became a fixture on my browser. I’ve watched the above video so many times that I have detected each and every tweak and change that publisher Fredy Valencia Lobo Fredy has made as he made it. While I prefer the original one before any changes, it’s still an excellent video which is sure to captivate the boy. Here’s to you, Fredy.

This video is regularly shown as an interlude between programming on Discovery Kids in Peru, and it got stuck in my head too. So I looked it up. Produced by Medellin-based media company Canto Alegre, there are two children in the video of a team making a salad who I believe may have the natural gift for television.

An unlikely one for me to look given how obnoxious Spanish-language cartoons are, or at least American or British cartoons dubbed with Spanish voice actors. I’ve seen almost all the cartoons in Spanish, and my boy’s favorite of Thomas and Friends is by far the worst.

So it was very unlikely that one of the typically awful Spanish renditions of a Thomas song would get stuck in my head. But that’s exactly what happened with “Fuerza,” the only cover which is better than the English-language original.

This was the last song discovered from local cable, or before I bought the Smart TV and permanently cancelled Discovery Kids en español.

Wife also knew of this one and started playing the fun YouTube video for both the boy and baby girl. While Vaca Lechera itself is just OK, it was enough of a hit with the child to introduce us to the Songs from the Farm (Canciones de la Granja). And that’s where we get the stuff to keep the list going.

There is an English cover of this song which is a textbook example of why it’s such a bad idea to adapt songs in other languages.

This is the textbook example of one that will get the children up and moving and screaming along.

For the baby girl.

Songs from the Farm ultimately led us to the El Reino Infantil YouTube Channel, your holy grail for Spanish-language children’s songs. You need no other resource. Smart TV required. Fire the babysitter.

Another one that got stuck in my head with a hard Argentine accent. Uncle Mario the Veterinarian gets two thumbs up for its creative rhyming in Spanish, which is infinitely more difficult than in English.

I’m not sure this dude intended for this to be a children’s song. But I got this from a party CD I bought at the local market, the kind of disc that comes with 150 pirated tracks. You can ask for a children’s party theme which will have a mix of obnoxious, bona fide children’s songs along with adult songs which appeal to children – generally top 40 dance songs like Gangnam Style or LMFAO.

Have I missed any? Leave your recommendations in the comments with a link. Don’t spend too much time trying to embed a YouTube video, I’ll take care of that from my end.