Venezuela’s political and humanitarian crisis has entered a new phase. There will be blood.

In September 2015 – three months before midterm elections which saw the opposition win what should have been a parliamentary super-majority – I predicted that Venezuela’s future would feature some kind of autocrat or dictator.

In May of this year – after Maduro’s government neutered the parliament – I wrote that Venezuela is like Syria in that the ruling elite’s very liberty is in jeopardy if they lose power. Drug trafficking and corruption scams over which the United States government has jurisdiction (U.S. soil or via American banks) will be uncovered and prosecuted.

So the corrupt chiefs of Venezuela’s various fiefdoms have more than their money at stake in the fight for Venezuela’s government … Facing life in a U.S. prison is akin to facing death … Venezuela’s leaders are fighting to the death. No retreat, no surrender.

Whether Venezuela’s next dictator is on the right or left, there will be a violent repression in order to move forward. There will be blood.

I’m not writing to pat myself on the back, but rather to announce the battle and deliver highlights from Day 1. That is the battle referred to in the title, and that battle began yesterday with “La Toma de Venezuela” (The Takeover of Venezuela), a nationwide protest in which one police officer was killed and hundreds injured or jailed. 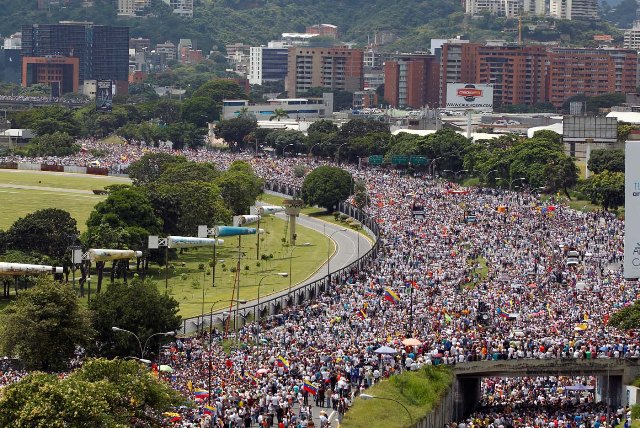 The Battle for Venezuela is not a hot war like Iraq, Afghanistan, Syria or Libya. But it’s not a cold war like the U.S. vs. Soviet Union either. It will be a warm war.

A warm war has violence, but lighter than a bona fide war and more protracted, with casualties coming during protests and the ensuing crackdown from whichever side ultimately controls government.

In a warm war, there will be an equally important battle for information and messaging as in a cold war. The opposition will continue to portray the country as a repressive dictatorship unwilling to deal with the humanitarian crisis, while the government will try to portray the opposition as undemocratic or violent and call for unending, fruitless dialogue in its perennial effort to buy time.

The audience for the competing propaganda is not the gringo world order (U.S., Europe, human rights NGOs, int’l banks). The propaganda war if fought over the Latin American neighbors who want to remain neutral, which in effect empowers Maduro. Many former allies like Brazil and Argentina have abandoned him, but there are enough tiny states (Jamaica, Nicaragua, etc.) who are ideologically aligned and/or previous beneficiaries of subsidized oil from Chavez to stall a vote to invoke the OAS Charter.

This is the signature video (original tweet) from the first day of the battle. A protester challenges police to shoot him because “Tengo hambre! Tengo hambre!”

This is another powerful one. While not being the signature image the previous one is, I actually think it’s more relevant because this is more likely to be how the government will fall. Neighborhood women not allowing security forces to repress the protests.

That was the thinking behind the above propaganda video, aimed at Venezuela’s rank-and-file police and military who don’t aren’t living like kings but will be tasked with putting down the protests. The three filmmakers who produced it were promptly jailed.

The police and military won’t have to repress the protests alone. They’ll have help from the colectivos – armed paramilitaries Hugo Chavez began giving money and guns to in order to “defend the revolution” (read: as a backup plan in case elections didn’t go his way). The picture above from Merida state made the rounds. That story’s developing live as the Twittersphere has identified the fella picture above.

Also this one illustrating security forces clearly coordinating with the colectivos, who are positioned behind the police line.

“Venezuela is on the edge of a political crisis that could push it into a protracted and violent conflict along the lines of Colombia’s civil war,” writes an expat who has recently left after 24 years. “I suspect and fear that Venezuela’s political crisis will only be resolved with bloodshed. In such an outcome there will be many innocent victims, and I left because I didn’t want to be one of them.”

So sit back and watch. The place to follow the latest developments is Caracas Chronicles, the best English-language blog covering Venezuela. If you want to go deeper than the three or four daily articles CC publishes, watch the hashtags on Twitter. Yesterday’s was #LaTomadeVenezuela.