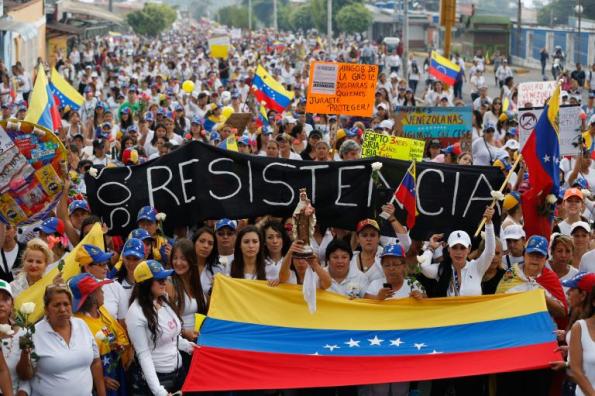 As much as I am for pro-business and free-market policies, I think we’ve had enough of the “end of the pink tide” talk.

The pink tide is one of the names given to the rise of the left in Latin America starting in 1998 with the election of Hugo Chavez. The big names were Venezuela’s Chavez and now Nicolas Maduro, Argentina’s Nestor Kirchner and his wife Cristina Fernandez, Brazil’s Lula da Silva and Dilma Rousseff, Ecuador’s Rafael Correa and Bolivia’s Evo Morales.

These leaders to varying degrees ushered in what Chavez called “21st-century socialism,” which boils down to spending windfalls earned from high commodity prices on social programs for the poor. There were also varying degrees of consolidation of power, appropriation of the media and corruption that would make even Latin Americans blush.

That pink tide is over, or “receding,” say the analysts. The end of the pink tide was cemented with the election of pro-business President Mauricio Macri in Argentina and the victory of what should have been the opposition’s supermajority in Venezuela’s legislature.

Aside from the losses the hardcore leftists are suffering in the polls, the degree of serious problems facing each country swept up in the pink tide stands in stark contrast to those that remained business friendly, such as Peru, Colombia, Chile and Mexico.

Venezuela: humanitarian and political crisis, highest inflation in the world, GDP set to recede by 10%, crime rates similar to war zones, Zika. Nothing new there.

Argentina’s economy has been in recession since 2013. Cristina Fernandez compromised the national statistics agency so much that nobody knows what to believe even about the region’s runner-up in inflation. The former president is facing several corruption probes which are looking hard to get away from unscathed.

Brazil’s Lula da Silva became the envy of the more pragmatic liberals once it was clear how far Chavez and Fernandez were willing to go to undermine democracy and foster corruption. But you won’t see any politicians vowing to implement the Brazilian model anymore, not after the Petrobras scandal dragged the Workers Party into global disrepute, culminating in the impeachment of President Dilma Rousseff. Then they got Zika just in time for the Olympics, which were a “dumpster fire” type of story from the beginning to show off how well Brazil’s left handled their historic cash windfall.

The big three in Venezuela, Argentina and Brazil are all suffering economic recession and double-digit inflation, in descending order of suffering.

Ecuador is in a slight recession or stagnant. The U.S. dollar is making life difficult there, but the official currency isn’t Rafael Correa’s fault so much as a weak, oil-dependent economy and ballooning fiscal deficit. In 2008 Correa basked in the leftist limelight when he voluntarily defaulted on $3.2 billion in “illegitimate” sovereign debt, because the bankers were “monsters.” He has since come back to the table of international finance for $750 million at the low price of 16% in May 2015. Then an earthquake leveled two towns, rebuilding which will cost billions of dollars the government simply doesn’t have. Like Zika, the shit hits the fan just at the worst times. But Ecuador looks like it will get loans for just 11% this year.

While Bolivia has occasionally seen double-digit inflation during Evo Morales’s government, the economy is not in bad shape. But analysts say that Morales is fairly pragmatic in his economic policy, more antagonistic in his rhetoric than policy. But his biggest challenge will be in avoiding Lula da Silva’s fate in a scandal featuring his mistress, a secret love child and over $500 million in contracts the mistress won for a Chinese firm.

Now look at all the gringo-allied countries which adhered to the Washington Consensus, enjoying solid growth and banking modest reductions in poverty. Without looking at every country of the Pacific Alliance, consider Peru. GDP growth fell to 2.6% in 2014, a news item the leftist countries would kill for. A big concern last year was that inflation was just above of the target range of 1% to 3%. Cry me a river!

In almost every example, the leftist governments went belly-up at the end of the commodity boom and are going through varying degrees of hard times or crisis. Meanwhile, the neoliberal capitalists are trying to work out what they have to do to keep the growth going, to avoid a slowdown.

So it’s easy for neoliberals like us to point and gloat, to celebrate.

Ending the End of the Pink Tide

The fight’s not over. I don’t think it will ever be over, if the fall of the Berlin Wall didn’t end it.

The good intention behind “socialism” is to alleviate poverty and to foster equality. All the socialists’ dreams are good dreams to have. The problem is that their policy ideas require giving the state significant control over the economy, which inevitably leads to controlling thought and expression as well.

The new challenge to market economies is terrifying because it does come not from Latin America, but from the United States and Europe.

After the fall of the Berlin Wall, many former Marxists and communists became radical environmentalists in movements with names like eco-socialism and green politics. In essence, environmentalism became the new socialism.

We need to stop using the words “socialism” and “capitalism.” Those terms are too loaded after decades of overuse. The more accurate terms are “state-planned” vs. “market” economies.

Too often the socialists would point to a mercantilist Latin American economy where the government hands out official import licenses, favorable exchange rates, property titles and other rights to doing business, effectively controlling who makes money. The socialists would point to these appalling economies as evidence that “capitalism” failed, when these were not free markets at all.

Those failures lied in the state control, which dilutes accountability and efficiency, and redirects the profit motive from serving customers (the people) into obtaining kickbacks for that which is under your control. The only difference lied in the state’s end goal, to alleviate poverty or to oversee a feudal society. In that sense, an economy like Peru’s in the 20th century had a lot more in common with Cuba’s than the United States’.

The next great challenge to market economies is that the opposition to free trade isn’t only coming from the left, who historically distrust the private sector in favor of greater state control. This time, opposition to markets is coming from the right too. I won’t go so far as to say it’s unprecedented, but in the United States it is a historic departure from the Republican platform of the last 100 years.

The Republicans led by Donald Trump now want to revert economic progress and go back to a time when the government decided what sectors its citizens worked in, which economic actors won and lost and how much certain products should cost by exerting control over what its citizens buy and at what prices.

I recently spent three weeks in Missouri, a mostly red state. I couldn’t believe how far the anti-free-trade sentiment had gone beyond union laborers and into “conservatives” who consider themselves to be educated in economics or business-friendly. This ideology flies in the face of the classic economics of Adam Smith and Milton Friedman which Republicans championed – often in a superior manner.

The pink tide may have simply moved north. So we students of business and economics can never walk away from making the case for free enterprise. Because only free markets realize true prosperity by leveraging private, individual initiative in a compounding effect when everybody works to improve their own lives, which usually means doing something for somebody else.

Serving the MARKET, not the STATE.

Erecting the walls of protectionism is a step in the big-government, statist direction. It is reverting economic progress by giving control to the state.

The statists were always in the Democrats. While the “No TPP” signs at the Democratic convention were nauseating, they’re nothing new. But hearing the Republicans spew the same tripe is new ground. How much more can the “Bern” pull Hillary far enough to the left with the red states pulling the GOP into nativism until the United States steps back from world leadership in commerce?

If the case for free markets loses ground in the United States, it is likely to spread to Latin America. In Peru, the leading economic performer of the last decade, the story wasn’t as rosy as the international press may have made it out to be.

The 2016 elections saw investor-favorite Pedro Pablo Kuczynski win the presidency over daughter-of-the-dictator Keiko Fujimori. So yes, the gringo economist won and the runner-up would have generally kept the party going.

But leftist psychos Veronika Mendoza and Gregorio Santos won 18.8% and 4% of the vote respectively. If their voters had all gone in for the same horse, Mendoza would have edged Kuczynski for the runoff against Fujimori. In other words, more people voted for the policies of Venezuela, Argentina and Brazil than for Kuczynski, who represented the Washington Consensus down to his U.S. passport.

Kuczynski won the election riding a tide of anti-Fujimori fervor. What if that carried Mendoza into office? Where would her policies have taken the regional economic star?

Fujimori herself isn’t that much of a friend to open markets. She wants to expand the role of state oil firm Petroperu and tear up binding contracts over the massive natural gas fields at Camisea. Most Peruvians I know who voted for her preferred her over Kuczynski because she wouldn’t “give away” Peru’s resources to the gringos. That is the same right-wing, nationalist tripe that is stewing in the movements behind Donald Trump and Brexit.

So let us free-market advocates and globalists be careful in declaring the end of any pink tide.

The Death of the Latin American Left (New York Times)

The ebbing of the pink tide (The Economist)