In 1914 the Panama Canal was lauded as the largest engineering project in history. A century later there is a new contender that, if completed, will take the title.

The Nicaragua Canal is an ambitious project plans to cut a waterway three times longer (175 miles) and 150% deeper and wider than the Panama Canal and carry 2.5 times the capacity. It also includes building tourist centers, five-star hotels complete with golf courses, an international airport in a free trade zone, new highways running alongside the canal, two deep-water ports, and an artificial lake to support the water needs for the locks. Nicaragua is the second-poorest country in the western hemisphere after Haiti, and the total cost of investment is estimated at $50 billion. Government economists predict that 30% GDP growth will lift millions out of poverty.

Is it worth it? 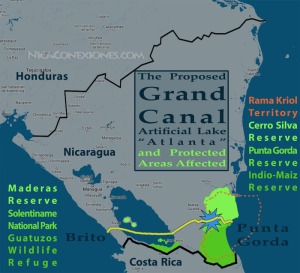 There are seven natural reserves that will be directly affected, including the Punta Gorda Reserve that will be swamped under the new “Lake Atlanta”. The canal will divide the territory of the indigenous Rama-Kriol people in two; the village of Bankukuk Taik, home of the last remaining Rama speakers, will be the location of the deep-water port on the Caribbean side. The canal will have to pass through Lake Cocibolca, the largest source of freshwater in Central America and the only lake in the world that contains sharks.

Nicaraguan president, Daniel Ortega, led the Sandinista revolution to overthrow the US puppet dynasty of Somoza. The aging, soft-spoken Ortega has held power from 1979 – 1990 and from 2007 until today. His dominant Sandinista party nixed the previous project that would have linked both coasts by rail and moved cargo at high speed from a Caribbean ship to a Pacific ship at a fraction of the cost of the current canal plan. That project left the American-owned Nicaraguan Interoceanic Canal Company jilted at the altar.

While there has been no official word on the breaking of the contract, the geopolitical dimension is obvious. The United States built the Panama Canal 100 years ago, after siphoning Panama off from Colombia solely to build the canal in an independent state. Panama has been a reliable ally of the United States ever since.

The Nicaragua Canal is being spearheaded by quiet, withdrawn Hong Kong businessman named Wang Jing on behalf of the HKND Group (Hong Kong – Nicaragua Development Group). Jing has telecommunications companies and infrastructure projects going on around the world, including Xinwei Telecom that was contracted to build a new cellular phone network in Nicaragua which never got off the ground.

Wang insists that his new canal building company is courting private funding. The Chinese have been tight-lipped, insisting that they have nothing to do with backing the project, though construction has been contracted nearly exclusively to a series of Chinese companies. Given the likelihood Chinese state money will help pay the $50 billion price tag, the fact that Russia has announced they will provide port security, and Venezuela’s Nicolas Maduro’s public support for the plan, there is clearly a geopolitical element in the base logic of the canal.

Most Nicaraguans support the canal. Ask any campesino in the coffee-growing mountains two hundred miles away, and he’ll tell you the wealth brought in will trickle down so his family can buy a new television or iPhone. However, little has been reported on the people who stand in the way of the canal. While construction is due to begin in December, the environmental studies and census visits have been going on for months. Groups of Chinese accompanied by Nicaraguan police have been walking unannounced through private property to take measurements, intimidating residents. That has sparked a backlash of protests.

The international news outlets have been skeptical of the project. The Nicaraguan government rushed a new law granting the land rights to HKND and signed the Google-translated, Mandarin-to-Spanish contract without debate in one week. That land includes designated indigenous territory of the Rama-Kriol – which was signed, sealed, and delivered by Daniel Ortega himself only three years ago. “Ortega regala patria” (Ortega gives away the homeland) and “Fuera Chinos” (Get out Chinese) read the signs held by protesters.

There has been some coverage on people living in the easily accessible areas of the canal’s path, but nobody really knows who lives in the further reaches of the route. This is one of the most remote and inaccessible areas of Central America. Areas in the east or west are accessed by boat or horse, respectively, where people live as subsistence farmers and fishermen. Homesteads and miles of rainforest stand in the way of the proposed canal.

I plan to make a two-week expedition with a Nica-American field photographer and local Rama Indian friend to document the stories of people along the route. We will also document the reserves. We hope to make a time-lapse video of the route from the Caribbean, up the river, over the hills, across the giant lake, past the volcanoes, and over the shin of Nicaragua to the Pacific. The trek itself will be epic, but more important will be the photos, stories, and video documenting this land before the canal is built.

My Kickstarter campaign funds the three of us to be gone for two weeks plus GPS, machetes, and other necessary gear. If you are interested in learning more about the expedition, visit:

If this project is funded, Expat Chronicles readers will get a first peek at the rough draft photos and stories upon my return in late November.

Regardless of whether the expedition happens or not, the canal will likely go ahead. Best-case scenario will be that everything goes according to plan and the average Nicaraguan can gain from this international project. Worst-case scenario will be that the canal starts and never gets finished. All the destruction without any of the benefit. With the start only weeks away and the world watching, it will be interesting to see how this game plays out.

Casey Callais has been living in Nicaragua since 2008. He keeps up two travel blogs and recently wrote a guide to festivals in Nicaragua. You can find out more at nicaconexiones.com.

Given the Panama Canal is vying to increase its canal traffic in competition with Suez, it’s hard to imagine how another canal in Central America makes any sense. But I’ll try.

What do you think?