Kendall was also addicted to heroin before coming to Colombia. He identifies a part of the addiction as wanting to get high by injecting drugs into your veins with a needle. He takes to injecting cocaine. This chilling story is about a day Kendall spent with his needle and pure Colombian cocaine in Cartagena. 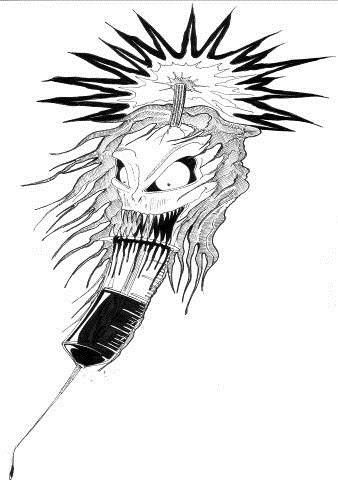 Kendall’s rendition of the needle

I woke up one afternoon in a particularly weird frame of mind – self-destruct, really. Connection had come up with some excellent whiff and I’d been up all night sniffing it with an assortment of travelers, eventually going to bed with a beautiful creature at dawn. But what I truly wanted to do was to slam it. I never did it when people were about, which had been the case all week, so what I needed was privacy.

There was a bar/brothel a few miles north of the Old City on the coastal road that was built on a very rickety pier. It’d been constructed from reclaimed lumber, pieces of tin roofing and plastic sheeting. It was late afternoon when I arrived there. I walked by several working women in different states of undress as they busied themselves putting on makeup and stuffing themselves into frilly garments. I found the proprietor/madam and procured a room for the night.

“No, señora, I won’t be needing a woman tonight,” answering her inquiry, “…too tired.”

She showed me to a niche with a bed and small table, upon which were a towel, glass, small basin and a pitcher of water. I closed the door behind me and immediately set the already modified syringe, a spoon, some cotton and three grams of pure crystal cocaine upon the table. I then dumped a large pile of shiny flakes into the spoon. The first slam was always the best so a large amount was called for. I usually added more if the quantity wasn’t so scary that it caused me to ponder, Could I die doing this?

It only took moments for me to prepare the concoction and to tie myself off. I was shaking from the anticipation as I jammed the needle into my arm. I hit a vein immediately and watched the blood rise up into the syringe. This was the moment when one was in total control of one’s consciousness; one just had to squeeze the pacifier for the promise of ecstasy. It was better than any orgasm imaginable, for surely no woman could do this.

I squeezed half the coke into my vein and immediately tasted the coke in my mouth, when suddenly, I felt an explosion of brain cells igniting my mind with a blaze of lightning and the roar of rolling thunder that blocked out all thought.

Wow, what a rush!

The blow was much stronger than I’d anticipated and I was reluctant to inject the rest. But the needle was still in the vein, too easy; I squeezed in the remainder of the coke and lay back on the bed.

My heart fluttered, then stopped for a second, beat again slowly once or twice then fluttered again. I’d been lying on the bed for twenty minutes in terror, before I finally regained my senses.

Man, that was close. I won’t do so much the next time.

I made up the next mixture and drew it up into the syringe, but I was trembling so much from the effects of the first shot of cocaine, that I ended up stabbing myself several times before hitting a vein. I slammed the dope again half at a time but the rush wasn’t there, which was what injecting coke was all about.

I was shaking uncontrollably waiting for my heart to burst; this was total insanity. I could hear cops outside my door and they were whispering stuff I could almost understand – but not quite. I huddled up in a ball on my bedding completely paranoid out of my skull.

What have I done to myself?

An hour passed yet the police hadn’t burst into my room and taken me away. I opened the door peeking outside rapidly, but all I could see were tawdry women being groped by men drinking beer. The cops must’ve been just paranoid delusions, nothing more than an overactive imagination, so it must be time to do more.

It didn’t take long to prepare the poison but my arms were already taking a beating. I should’ve been more careful but I was overly anxious and kept making more holes in my arms while trying to find a vein. I finally found one but only shot up part of the mixture before the needle went through it. I then hit another vein and injected all of it at once, but most of it went into my arm instead of the vein. I didn’t feel any rush but…

…I hear the cops returning. They must’ve been hiding when I looked out the door.

I was trembling on the bed waiting for them to crash into my room when I noticed these giant 3-inch cockroaches staring at me on the wall. I went up close to one and noticed its antennas were really TV cameras! The cops were spying on me.

But I didn’t care; all I wanted was to feel that coke rush one more time.

They can watch if they want to and arrest me; I don’t give a flying fuck.

I took my time preparing the next blast noticing I couldn’t hear the police outside my door any longer. I took a quick gander out into the hallway without seeing any uniforms about but knew they were out there somewhere hiding.

They’re just trying to scare me is all. Fuck it.

I closed the door and began perforating my arms with an unsteady hand and a needle that kept clogging with coagulated blood. I got some of it into a vein but most of it went into my arm again instead.

But wait, the cops are just outside my door once more and there are cockroaches everywhere just staring at me.

I took a shoe off and attacked one of the creepy-crawlers on the floor and slammed it hard, but all it did was look back up at me with its evil antennas. I bashed it several more times but it didn’t seem to bother it.

How can it withstand the beating I’m giving it? I looked at the bug more closely. Oh shit, the fucker’s made of polished brass. No wonder I can’t hurt it. And they’re everywhere.

An hour had passed but the cops still hadn’t arrested me for some unknown reason. They were playing with me. They could see everything I was doing from the TV antennas their cockroach buddies carried around. They were taking their sweet-ass time so…

Fuck’em, let’em watch me do it again.

I made the next mixture really strong; it would’ve been better to overdose than to go back to prison. I found a vein easily and shot it all in at one time. Suddenly, a jet plane crashed inside my brain and a fireball engulfed my skull. My heart was beating so fast that it hurt. I could hear cops running down the hall calling out my name.

I’m a goner. The cockroach spies are circling in on me.

I attempted to destroy one with my shoe again, but it flew at me and landed on my leg horrifying me. I beat at it with my shoe but it remained undaunted; it just kept on glaring back at me with its TV feelers. I beat others on the wall and floor but their tank-bodies were too well protected.

Some time went by. The cops were still playing hide-and-seek and hadn’t entered my room yet. Nor could I hear them. I looked at my packet of snowflakes with nearly a gram left; this was way more than I’d ever shot up at one time before in my life. I didn’t care – but I wanted to be done with this shit. As I was preparing myself a syrupy thick mix of crystalline coke, I was experiencing sheer terror and insanity. All I was thinking about was just one more rush as I drew up the mixture, filling up the syringe completely. I took several breaths, relaxed and hunted for a vein on my hand – my arms were trashed. I hit a vein well and squeezed in some coke but my vision immediately began to break up. My hand was turning into squares that drifted apart. I panicked and squeezed the entire concoction into my hand. I collapsed backwards onto the bed, looked up at the ceiling and watched as rifle barrels crashed through it pointing at me. They were going to fire at me so I tried to block the bullets with my hands, but it was no good, there were just too many of them. I’d never been that scared in my life. I knew I was dead. Rifles also started popping through the walls as my vision crumbled and literally blacked out at times. My heart was in overdrive speeding into oblivion. After many long, long minutes the rifles disappeared behind the walls and ceiling.

I can’t believe I’m still alive. I went to stand up and fell to a floor covered in cockroaches – all glaring at me. I crawled back to the bed, grabbed the syringe lying there and slammed it point first into the wooden floor where it stood upright. I was dazed and crazed trying to calm my heart down and deal with the paranoia, cops and cockroaches.

It was early morning; the cockroaches no longer sported heavy armor and cameras and squished when I stepped on them. I sat up on the bed trying to decide if I were together enough to find a taxi back to the pad.

During the taxi ride back home I felt relief realizing: I know now beyond any doubt whatsoever, that the needle will no longer be a part of my life. I spent last night trying to destroy myself. Why? Don’t I love life? Haven’t I fought desperately for my freedom? I concluded that my morbid fascination with the syringe coupled with my lust to flirt with death made for a deadly combination. Another leaf had turned over.

And man, those freaking cockroaches were scary – tough little bastards.