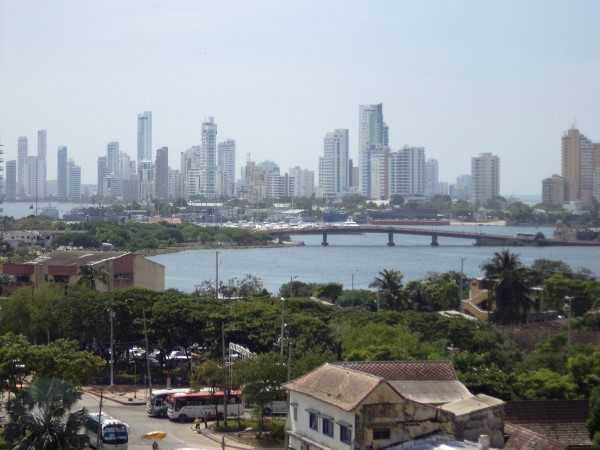 For our six week trip in Colombia, my Peruvian wife and I saw Bogota, Medellin, the coffee region, San Andres, and a pueblo / finca relaxation. I couldn’t squeeze in Cali, which I’ve never visited. But I made a priority for what seems to be the Machu Picchu of Colombia, the crowning jewel for tourism, Cartagena. I booked a two day trip.

I hadn’t been anywhere on the Coast yet. I’d heard horror stories of the heat, and if there’s one thing that doesn’t mix with big, white, hairy guys like me, it’s heat. Our first day I realized it was worse than I had heard. It’s the closest climate to hell on earth that I’ve found. I could never live there. It’s so hot you have to drink beer to tolerate it. But then you end up drunk and by 3 PM. That’s what happened to me. So we spent a lot of time in our air conditioned hotel room. We didn’t do anything aside from exploring the Walled City and the nearby San Felipe castle.

Castillo San Felipe de Barajas is a giant fortress where the Spaniards repelled British invaders in the Battle of Cartagena de Indias. I have no idea how those guys fought in that heat wearing military uniforms. I would’ve died. But it was worth a touristic visit.

Because Cartagena is a top global destination for sex tourism, I thought it was going to be crawling with prostitutes. I was pleased to see absolutely zero. Then again, I was holed up in the hotel with wifey early every night, and we didn’t go to any rumba areas. Maybe the city is crawling with them, but I didn’t see any. On the other hand, I was offered cocaine twice in two days. Given I was only alone momentarily to buy beer in tiendas, that puts Cartagena way ahead of Bogota’s La Candelaria and Zona Rosa combined for pushing drugs on tourists.

I can see why people say you have to visit Cartagena. It’s a beautiful city, as you can see in the pictures below. But the pictures don’t capture the agony of the heat. HELL ON EARTH.

For slideshow viewing, see the Cartagena album on the Expat Chronicles Facebook page.