This is a critical article on Colombian cuisine. If you’d like to read a positive article, see 10 Things to Eat in Bogota.

I have a personal vendetta against El Corral because of how many people drool over it. I first heard of the chain from one of a well-traveled rola gomela. She recommended it for whenever I want a good cheeseburger. She added this chain could compete in the States.

You see, hamburgers in Latin America are triflin’. It’s not just Colombia but everywhere. I don’t know how you fuck up a hamburger; when I buy ground beef at the store and cook them at home they taste the same as in the States. But South American burger joints add something to make the beef weigh more, or fuck it up in some other way. I never order hamburguesas here.

El Corral opened in downtown Bogota in 1983, so it’ll soon complete twenty years of mediocrity. You see, El Corral burgers aren’t bad. They’re eatable, but they’re mediocre. The girl who said El Corral could compete in the US couldn’t have been more wrong. They wouldn’t have a chance. I’d classify El Corral quality as high-end fast food or low-end service dining. So their competition would be places like Fuddruckers, Red Robin, or America’s best FatBurger, and those same places charge less.

What’s unfortunately not mediocre at El Corral is the pricing. It’s expensive. I can’t eat there for less than $6 USD, and that’d be just a 1/3 lb burger. For a proper half pounder plus combo, you’re looking at 16,000 – 20,000 pesos ($8-10 USD). So not only would El Corral fail on taste against the American competitors, it’d also fail on price. This 1-2 combo would make for a prompt exit from the US market. A quick, decisive defeat just like the gringa women did against the Colombianas in the Women’s World Cup. I’d smile if that girl who recommended El Corral had an opportunity to invest in El Corral’s expansion into North America. I’d like to see that investment get cleared out. Not just lost a little, but CLEARED OUT.

Bottom line: You couldn’t sell El Corral burgers for $10 even in downtown Chicago.

Apparently I’m not alone here. See this old Poorbuthappy thread from 2008 where some extranjero is calling El Corral out for what it is: expensive fast food. 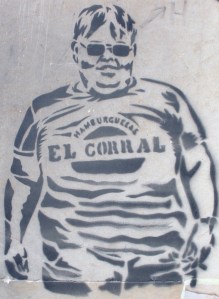 Cool image, but don’t worry about El Corral causing obesity in Colombia. They can’t effect too much obesity among a people where 60-70% can’t afford to eat there.

Pizza is another American food (maybe Italian originally, but it’s an American-dominated industry now) that South Americans fail in their attempts to reproduce.The cheese is fine but where our Latin friends lose the deal is in the sauce. There is no effort to develop a quality marinara sauce to begin with, but it doesn’t matter because they put so little sauce on the pie you can’t taste it anyway. I’ve watched in wonder while pizzas are being made; I estimate one teaspoon or a tablespoon at most of tomato sauce is used for an extra large 16” pie. The dough takes on a faint tint but still shines bright white when the cheese is put on.

Average slice down here is crunchy dough, no sauce, less cheese and toppings than dough. Also annoying to extranjeros are the toppings options in Colombian pizza. They have Hawaiian in the US, but it’s not a stalwart among the two or three flavors available. So if you don’t like Hawaiian pizza or Chicken with Mushrooms or Criolla, you may be out of luck for street pizza.

So if bent on pizza you’d go the corporate route. You think you’re too cool to order Papa John’s, Domino’s, or Pizza Hut, so you’d check out the Colombian pizza chain, Jeno’s. If you eat there you’ll quickly realize you should’ve gone American.

Before the bill comes, you’ll eat an inarguably low quality pizza made with inarguably low quality ingredients. The toppings looked like American pepperoni, but the taste and texture was a little off. My buddy elected for the deep dish because it’s more food, but the amount of cheese and toppings combined comprised at most a fourth of the amount of crust. I say ‘crust’ because the crust wasn’t doughy. It was hard and dry dough, some bites crunched all the way through. I believe I got fed up with the crust toward the end of my pie and just ate the cheese and toppings off it.

The second time I went with the same friend as the first because he gets coupons. The first was a buy 1 get 1 free pizza deal. He knew I would never do that again, so he asked about his 2 for 1 pasta coupon. I agreed. What I got was just as much a disappointment as the pizza. The pasta came in a box so small I could outline it with my two index fingers and thumbs. Inside was one meatball sitting on a modest amount of marinara and a pile of spaghetti. After quickly putting it down I realized I could eat two of those for a proper meal, but then I’d have had to pay the full coupon price of 13,000 pesos or whatever. Then I realized that, without the coupon, they sell that little platter I just devoured like an appetizer for 13,000 pesos. Can it really be? No way.

So where El Corral barely passed on quality and failed on exorbitant pricing, Jeno’s failed miserably on both quality and price.

Colombians are proud of their soups, which I can only explain by thinking most have never left Colombia. The US isn’t necessarily known or recognized for good soups. Chicken Noodle and Baked Potato soup are hardly inspiring. But the US came up with Chili, which may be the best soup on the whole damn planet.

Colombians can be proud of Ajiaco and Sancocho, and that’s it. Ajiaco is on my list of 10 Things to Eat in Bogota. But it’s not so good that the hip “Nuevo Latino” restaurants and lounges in the States will put Ajiaco on their menu. There are too many other Latin American items more delicious. And Sancocho’s even simpler than Ajiaco. Surprisingly, Ajiaco and Sancocho isn’t considered simple here. Colombians can go really bland, as in sopa de arroz. Yes you read that correctly, rice soup. How delicious does rice soup sound to you? I’ve also had pasta soup, it had potatoes in addition to pasta.

Another reason I give Colombia no props on their soups is because I lived in Arequipa, Peru before moving to Colombia. Peruvian food murders Colombian. And the south of Peru prides themselves on their soups. They have almost ten distinct soups. Some are dark brown, some orange, one (chupe) with loads of seafood in it. I couldn’t keep them all straight but most were better than Ajiaco and Sancocho.

My Irish roommate told me about his first year in Bogota. He partied hard in La Candelaria. His Irish buddies and him drank almost every night chasing Colombian chicks. Their house became known as a party house for girls who wanted to hang out with extranjeros. His adventures never caused a stir in me, until he told me about his diet. He ate street food every day.

When he told me that my stomach turned, I may have shifted in my seat to defend my insides from the bad influence that is this man. Let me explain further:

He ate in the street for a year. The street joints are hamburger-and-fries stands (which suck as stated above), pizza by the slice (which suck as stated above), empanadas and fried items etc. This is obviously not food for athletics. If you’re not going to eat to improve your body, at least eat food that tastes good. All this shit makes you feel worse after eating it, but it doesn’t even taste good. The empanadas are so processed, especially in Bogota where they’re perfectly formed and shaped. When all the empanadas look the exact same, you can be sure they came in a frozen box before being deep fried.

My least favorite of Colombian street food are buñuelos, deep-fried balls of stinking dough. It’s a fried bread ball with a moldy smell. And from the windows they scream at me: “POOR PEOPLE SHIT”.

Re: “poor people shit” – It’s kinda hard to write that the national staple and source of cultural pride is on this hall of shame, but arepas suck. I don’t eat an overwhelmingly majority of the arepas served to me. I profile several different kinds, good and bad with pics in my post Arepas in Colombia.

Did I miss anything that should be in Colombia’s Culinary Hall of Shame? Let me know!