All Colombian women cheat – this is a common belief among expats in Colombia. I’ve been hearing it from gringos ever since moving to Bogota, but I dismissed it to sample bias — gringos meeting mostly girls of lower moral fiber. If you make friends partying in La Candelaria and Zona Rosa doing cocaine and ecstasy, what do you think you’re going to get?

In college I met almost exclusively family-type, “good girl” Latinas from the top 1% of social classes in Brazil to Peru. But you’re not going to meet those girls snorting coke at Ceci’s. So I thought the infidelity perception was an anomaly due to sampling bias. 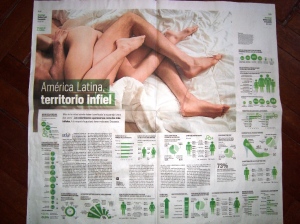 Then I came across this hard-copy article in El Tiempo from March of last year: América Latina, territorio infiel. The article says that not only does greater Latin America cheat a lot, but Colombia leads the region. How can I argue with the national letter of record?

The article isn’t as interesting as the statistics, and unfortunately the El Tiempo archive online doesn’t include those. So here are my picks, plus screenshots of the hard copy so you can see them all.

After reading this article, I started thinking about the dealings I’ve had with Colombian women, and I think a majority had boyfriends. From the very first Colombian girl I made out with to the current booty call.

So maybe there is something to the saying … 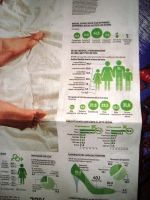