I got a dose of tear gas for the first time today. Late for a class, I was speeding north on the Carrera 11 bike path. When I pulled up to Calle 72, there was a small riot outside Universidad Pedagógica Nacional. Pedestrians blocked the sidewalk near the intersection so I had to slow my bike to a stop. There was no car traffic as the coppers had blocked off 11 and 72.

Being in a hurry, I sized up the situation. I saw the rolito rioters on the Calle 72 median on the other side of 11. They were throwing rocks at the riot police who were holding their position north of 72 next to the Porciúncula church. This was my view of the northeast corner (from the southwest).

I had to continue up 11 so I’d pass the church on my right. The rolitos were throwing rocks toward the church from under the trees in the median.

I quickly judged that it’d take a college baseball player or football quarterback to hit me from that distance with a rock heavy enough to hurt while I’m speeding past. These pussies wouldn’t have the power or accuracy.

I squeezed through the crowd and took off into the empty street. Just as soon as I built some speed heading across 72, I noticed a second group of rolito rioters on the northwest corner (not pictured) throwing rocks at the same cops standing next to the church. These guys were positioned behind the university fence that separates campus from the Carrera 11 sidewalk and bike path.

I hastily changed course and turned left after the 72 median heading west. Just as I started to speed downhill, I heard two loud pops. My nostrils filled with chemicals, as if someone broke their solution beaker in science lab class or mixed the wrong chemicals together. My eyes immediately teared up and tears ran from each eye while the smell made me nauseous. Fortunately I was hauling ass downhill and my next breaths were fresh air. I never saw the clouds.

I turned right at Carrera 13, which I followed north for two blocks, then cut back to the 11 bike path. My class was on Calle 94, and those nerds’ little disturbio had backed up southbound traffic the whole way. 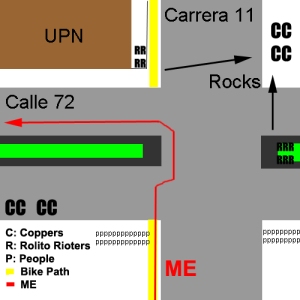 As you can see, my kid brother could hit me with a rock from behind that fence.

Universidad Pedagógica Nacional, or UPN as it’s spray-painted all over the city, is a big Education school. So those idiots throwing rocks are going to be teachers someday. They stage these harmless skirmishes often, so much so that nobody takes them seriously.

And here’s YouTube footage of some other riots near the same school.