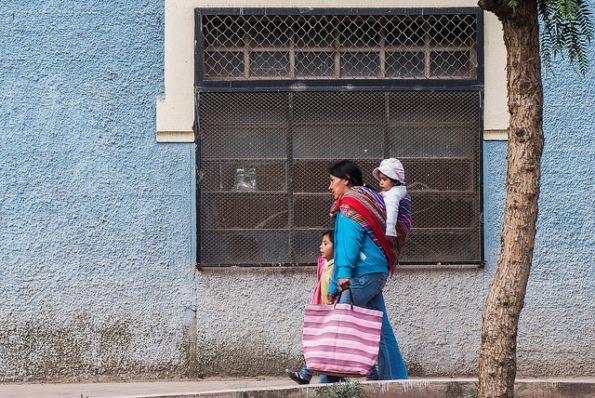 I spent Christmas in Arequipa with the in-laws. Wife was there for two weeks with the children, but I set my limit in AQP to seven days. So if she wants more she has to do it without me, which she does with plenty of family to help.

I limit my time there under the guise of my need to work. An Airbnb pad will not have an office where I can blockade myself off from wife and children.

But now I have a new excuse: Arequipa is awful for children.

That’s almost counter-intuitive because one of the things you always hear Arequipeños say is how Arequipa is better for families, and of course Lima is dangerous. But this is what you see on Day 1 pushing your baby in the stroller.

And you’ll inevitably come across a corner like this. You sometimes have to go up the curb in a hurry in order to get out of the way of oncoming traffic, which will sometimes come in at speed to teach obnoxious pedestrians a lesson.

This is a more egregious example of completely insufficient sidewalks unfriendly to pedestrians and impossible for the handicapped or baby strollers. Here you see a two-feet-wide sidewalk with one step at the corner and two more steps halfway up the block. Not at all uncommon.

The icing on the cake. To further complicate the difficulty in navigating Arequipa’s sidewalks with child, a vendor set up shop and took half of the already-insufficient space. To get around this newsstand with a stroller, I was forced to go into the street a little. If that motorcycle had parked a few feet back, I would have had to go to the left of the motorcycle, or of course hold the baby while I fold up the stroller to walk between.

So up until this point, I am only ranting about infrastructure which is inadequate for anybody with a small child in a stroller. But the lack of things to do is another problem.

Wife went one week ahead of me, and despite the fairly regular complaints about Lima it was only a couple days in Arequipa before I started hearing, “The children are bored.”

Yeah, just like I would be if I had to spend more than a week there.

Big cities are like playgrounds for adults. But they’re also fun for children. Lima has more family-friendly options than you can realistically visit every year. Here are some of my faves:

Each one of those destinations will have the children entertained for hours. They’ll cry because they don’t want to go home.

In Arequipa there is almost nothing. The more conservative, provincial culture prefers to keep the children indoors.

Tingo is a public swimming pool with slides and whatnot, but the boy doesn’t like to swim and the baby is a baby. So no Tingo for us for a few years.

El Molino de Sabandia is a 17th-century mill with animals. Horseback riding, llamas and alpacas, chickens, guinea pigs, ducks and of course mosquitoes. Even a fighting bull. It’s fun for a couple hours. We go every time we’re in Arequipa, not because it’s that fun but for lack of other options. On this visit we went twice.

Plaza de Yanahuara in the heart of Arequipa’s moneyed district is a common stop on the tourist beat. I couldn’t believe how small it was though. Literally half the size of Parque del Bombero, a Lima square we sometimes take the boy to play and run around. Flanked by street traffic on three sides, Plaza Yanahuara is not big enough to “run around.”

But then this gem, just below the Yanahuara mirador. That’s a 20- to 30-foot drop behind this bench which is easily accessible for any walking child. Not exactly the place to “run around.”

Here’s a doorway at the end of the mirador. Imagine your beloved boy or girl sprinting through to see what’s on the other side! A two-foot sidewalk and cars flying up and down … SPLAT.

Parque Selva Alegre downtown is one of very few urban parks in Arequipa. The east side of the park has no playground or children’s attractions. It has two llamas which are let out every day to graze from 10 a.m. to 6 p.m. That’s fun for almost an hour.

But of course the city has to make even this one difficult for families. This is the crosswalk at the Parque Selva Alegre entrance. Note two curbs on each side of the street, and even a bit of grass to navigate. The traffic comes down from the right side at around 30 miles per hour with no stop sign.

The west side of Parque Selva Alegre would be a great park for children. It has a pond with fish and paddleboats, inflatable slides, two playgrounds and a few rare animals like parrots and monkeys. But it’s only open on weekends and public holidays! It’s closed most days of the week. And on the days it’s opened, it’s PACKED.

And to make things even worse, they built the sidewalk with this inexplicable cobblestone scheme to keep in line with making life hell for people with strollers. That makes a bumpy ride for the baby, not to mention slow. I folded the stroller up and carried the baby in and out.

Going back to being stroller-friendly, you wonder how a city can be this abusive to parents of small children. I have your answer.

Arequipa is in southern Peru, and in this conservative provincial culture it goes without saying that the father wouldn’t bother with caring for his children beyond financially. It’s up to the women of southern Peru, and they don’t use strollers. They use backpacks!

Are you going to Arequipa soon? Buy my Arequipa Travel Guide: Insider Advice from an Expat in Peru.