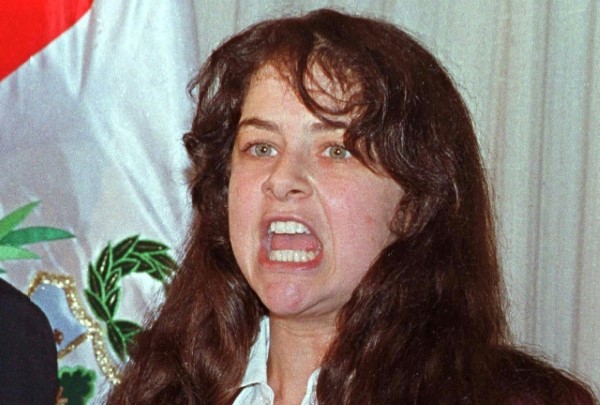 Convicted by a military court in Peru of treason in 1996, Lori Berenson spent 15 years in Peruvian prison. She was released to serve five years parole inside Peru. Yesterday she completed the 20 years of her sentence for colluding with terrorism and returned to New York.

The headline sparked an immediate scandal.

I was horrified by the use of “US” instead of “U.S.” as per AP Style guidelines for writing. But a quick Google search revealed that the AP bureau chief for Latin America’s Andean region got it right (surprise) and I, the ten-month editor of a web startup, did not understood the rule.

According to WritingExplained.org, terms like U.S., U.K. and U.N. which are abbreviated with periods in story copy do not get periods in headlines. So that scandal was resolved.

But “US” in the headline is not what caused the controversy here in Peru. Bajak’s use of the word “activist” drove Peruvians into a knipshit. You see, Peru HATES Lori Berenson.

In November 1995 police arrested Berenson and another woman on a public bus in downtown Lima. Berenson and her “photographer” Nancy Gilvonio, in reality the wife of MRTA leader Nestor Cerpa, had just left Peru’s Congress with press passes from Third World Viewpoint, a socialist magazine.

After police arrested Berenson, they led a raid on the four-story house in Surco which she had rented for the last year. A standoff ensued in which one police officer and four MRTA rebels were killed. Police arrested twelve guerrillas and seized 8,000 rounds of ammunition and 3,000 sticks of dynamite, along with blueprints and scale models of Peru’s Congress.

Police pieced together the MRTA plot to seize Congress and ransom legislators for the release of jailed MRTA operatives. Berenson denied knowledge of the plot and the weapons cache.

However when Peru’s intelligence police trotted her out for a press conference, an indignant Berenson clenched her fists and shouted that the MRTA rebels were not criminal terrorists but a revolutionary movement fighting injustice in Peru.

Lori Berenson’s image played into Fujimori’s hands perfectly to throw the book at her and justify the need for a firm hand in the face of continued terrorism.

After the fall of Fujimori and under pressure from the United States, Berenson was given a new trial in 2001. A civilian court sentenced her to 20 years in prison including time served for aiding and abetting terrorists.

Berenson was released on parole in 2010 but required to complete her 20-year sentence in Peru. She has since lived a low-key life with her son in Miraflores. Today she and six-year-old Salvador fly back to her hometown of New York.

The controversy on social media prompted several op-eds in the Peruvian press about double standards in American media, and some Americans followed suit. From the Huffington Post’s “When We Do It, It Isn’t Terrorism” (the title is enough to get a million social media shares):

While evoking sympathy for Berenson, [a different] article misses an opportunity to encourage some much-needed national introspection. The country would have been far better served by a serious discussion of terrorism rather than a puff piece that barely mentions why Berenson wound up in a Peruvian prison.

When terrorist acts were committed against the United States on 9/11, the constitution and supposed American values were quickly thrown overboard as the Bush administration was given carte blanche. Just this week the Supreme Court heard a case in which the Justice Department argued, in effect, that former Attorney General Ashcroft was above the law, and therefore not in any way liable for the gross violation of the rights of a man held under the pretext of being a material witness, because it was necessary to combat terrorism.

The article makes much of the fact that the former Peruvian president, Alberto Fujimori, is in jail because of excesses committed in his war on terrorism, again seeming to offer that as a way of exculpating Berenson. Meanwhile people like Ashcroft, Bush, Cheney and Rumsfeld collect seven-figure advances for their books and six-figure fees for their speeches and the hundreds of thousands of civilians that died as a result of the invasion of Iraq never get a moment’s thought.

There are not many defenses of Bajak’s use of “activist,” especially inside Peru. But one is Inca Kola News’ “Defining terrorism”:

Berenson was convicted first of treason, but then later in a civilian court of “collaborating with terrorism”. That’s what she did time for in Peru, she wasn’t convicted of terrorism. Semantics perhaps, but when it comes to writing a factual report you can’t call her a terrorist and have that word backed up by the official judiciary, the law, the government. Collaborating with terrorism is obviously a step away from terrorism because if not, she would have been convicted under just one of those three words, not all three. Osama Bin Laden a terrorist? Undoubtedly. FARC-EP? Yes. Guzman of Sendero? Not a shadow of a doubt. ISIS? Sign me up. But Lori Berenson, who was obviously up to no good in Peru in the 90s but never fired a gun, ordered a killing or did anything more than rent a house where other ne’erdowells lived? Your call, but mine is that at some point the word terrorist needs to be dropped because that person did not comply with the spirit of the word and did not instill terror in anyone.

However the court of public opinion won’t let facts get away that easily and so AP via Frank Bajak, who had the temerity to omit the word “terrorist” when talking about Peru’s least favourite US citizen, gets lambasted from all sides due to sticking with the facts, rather than going with the flow and telling people what they want to hear. “The terrorist Lori Berenson” is what you read all the time in the Peruvian press, but according to the law that is not so.

There you have both sides. Now my turn.

The truth, as usual, is somewhere in the middle.

While you have ample “puff pieces” of American media drooling over the unjust treatment of Lori Berenson by Peruvian bad guy, Alberto Fujimori, ethnocentrism is not why Bajak referred to her as an “activist.”

As the saying goes, one man’s terrorist is another man’s freedom fighter. Who is to say Osama bin Laden is a terrorist? Many people in the world would argue that George W Bush is a terrorist. Would the 18th-century Brits have called George Washington a terrorist? What about Sherman’s March to the Sea, is that terrorism?

One of my old time sinks, pathetic I know, was to read the Talk pages on locked Wikipedia articles. Start at the September 11 attacks, and somewhere in there are people arguing in essay format with no end that the “hijackers” cannot be referred to as “terrorists.” The talk pages are filled with similar semantic arguments that make you think.

So the politically correct thing to do in high-brow journalism seems to be to avoid the word “terrorist” at all costs. You can use “terrorism” when referring to the crime, but “terrorist” is a no-no unless putting it in quotes — single quotes if in the headline as per AP style (US ‘terrorist’ heading home after serving Peru sentence).

Taking that logic even further, I would not necessarily call the FARC, Abimael Guzman or ISIS “terrorists” – not in a journalistic piece anyway. On Expat Chronicles I’d call them that and much worse, but not when I’m trying to sound high-brow.

I would have to find another word in my efforts to be politically correct and objective.

But being “politically correct” and “objective” does not carry as much weight in Peru, and Peruvian media may not be considered “high-brow journalism” by their colleagues abroad.

The press here regularly uses “terrorist” in headlines. For-profit drug traffickers in the VRAEM who trade shots with the cops are always dubbed “terrorists.” I wonder if ever an impoverished coca farmer killed in the crossfire was lumped in with the “terrorists killed by armed forces.”

Understandably, Peru is sensitive to left-wing terrorism. The Shining Path was the bloodiest, most ruthless guerrilla army in Latin America (a region with many left-wing guerrilla armies) which inspired terror throughout Peru in their march toward Lima.

Peru is a reactionary place to this day, and Peruvians’ reaction to the word “activist” is at the heart of the controversy. “Terrorist” is not the right word (outside Peruvian media/standards), so the trick is to find another word.

Bajak’s choice of that other word was the problem.

I would not have used “activist” either. While a dictionary definition could probably justify the use of “activist,” I think common-sense users of the English language would agree that working with a platoon of socialist guerrillas to store a weapons cache and plan an assault on a sovereign nation’s legislature in a war to overthrow the government is a little more than “activism.”

And in my objective, politically-correct opinion, Berenson’s claim that she was unaware of the MRTA plans is a crock of shit. Nobody rents a four-story house in 1990s Lima for a gang of dudes she doesn’t know and sneaks the wife of the MRTA leader into Congress thinking she’s a photographer. Throw in the fact that Berenson came to Peru via El Salvador where she MARRIED a FMLN militant, and you have a bona fide crock of shit.

Berenson: less than a terrorist, but more than an activist.

In accommodating our politically-correct gringo standards, Bajak avoided the use of “terrorist.” But his substitution angered a reactionary Peru. Period. Nothing else to see here.

Here are some other titles that could’ve worked:

“Lori Berenson, American Convicted in Peru, to Return to US” (WSJ)

“American Convicted in Peru Plot Plans to Return to US” (NYT)

If you want to go deeper into Berenson’s story, the best account is interestingly the latest from Frank Bajak, “2 decades later, New Yorker jailed in Peru goes home.”