The plight of Venezuela is old news. But what will it look like in 10 or 20 years?

In order to keep his socialist project running, Castro had to tighten control over Cuba to the point of prohibiting basic human rights such as freedom of speech and emigration. Venezuela has been moving that way, even bringing in Cuban officials to help, but pulling it off on the mainland in a country significantly more sophisticated than 1950s Cuba is a different animal.

Less than a decade after Fidel Castro came to power in Cuba, General Juan Velasco Alvarado seized the presidency of Peru in a bloodless coup against President Fernando Belaunde Terry. Velasco led a series of nationalizations, creating state companies to operate in electricity, banking, oil, mining, telecommunications, airlines, and even fishing.

While Castro was an iconic revolutionary who thumbed his nose at the imperialist yankees, he was able to hold on to power because he ruled over a small population on an island with no porous borders. Velasco, on the other hand, did not rule over a small island or enjoy ideological support from international intellectuals. His refusal to cede power after one term as President prompted a coup by his own generals, who put Francisco Morales Bermudez in power.

Morales tried to keep the socialist party going, but the honeymoon had ended when the inevitable inflation and shortages materialized. The military leadership read the writing on the wall and decided to give authority back to civilians. Fresh elections in 1980 elected none other than the business-friendly Fernando Belaunde Terry in what amounted to a 12-year, 360-degree turn for policy in Peru.

But this is where it gets interesting. With an economy in tatters and a fiscal deficit spiraling out of control, Belaunde’s second term was not terribly effective in establishing economic stability and growth. In 1985 Peru elected the moderately populist Alan Garcia, whose term ultimately saw hyperinflation and a permanent debt default which disqualified the country from IMF or World Bank assistance.

When Alberto Fujimori was elected President of Peru in 1990, he followed two largely ineffective governments to inherit a bloody armed conflict against Maoist insurgents, hyperinflation exceeding 7,000%, and over half of the population living in poverty.

You probably know Fujimori as Peru’s signature war criminal, currently serving a prison sentence for murder, crimes against humanity, and illegal enrichment. You may also know him as the man credited with defeating the Shining Path guerrilla insurgency in Peru, or as the father of leading presidential candidate Keiko Fujimori.

Keiko leads the field solely because of her last name. Alberto Fujimori is not only seen as a successful President for security, he was also an economic reformer. Fujimori began a privatizations trend to sell off the corrupt and inefficient state companies, basically undoing everything done under Velasco and making “privatizacion” a household word in Peru.

In 1992 Fujimori dissolved congress and the judiciary to consolidate control. While the move was criticized internationally, his popularity among Peruvians soared. He got the market-reform ball rolling.

To understand why Fujimori is still popular, forget the war crimes. Forget the corruption. Look at the numbers before 1990 and after 2000. 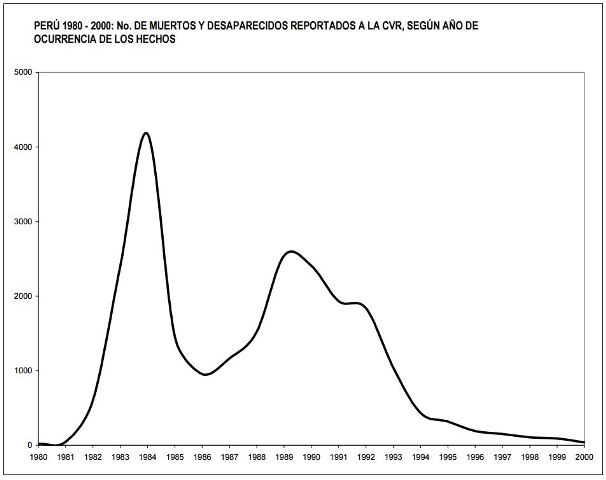 My favorite stat was the time it took to get a home phone line installed with Peru’s state telephone company. Under CTP, three to five YEARS. Under Telefonica, three to five days.

Would democracy have worked?

Fujimori couldn’t get it all done with a bickering congress. While I’m all for democracy, a true blue American, I’m starting to see some times in history when democracy certainly did not do the populace any favors.

Maybe I’m getting cynical in my years.

But consider the transition of the two largest government-planned socialist economies: the Soviet Union and China. The Russians seem to have gotten drunk on the neoliberal Kool-Aid and forced a democracy and market economy. The result has been called a “kleptocracy” and is one of the least attractive places to invest.

China, on the other hand, pursued a managed transition. While Russia is an economic basket case overly reliant on the price of oil, China is the new big dog on the world stage giving worry to the traditional power structure of Western nations. I believe China will eventually be ruled by an elected government.

Or look at the region in the independence era. After Napoleon deposed the House of Bourbon in the Peninsular War, the Spanish colonies were more or less forced into independence in the ensuing chaos and lack of leadership. All respect due to Simon Bolivar and Jose de San Martin, but Spanish America’s transition to independent democracies were more a product of circumstance than the will of the populace. And given those populations’ traditions of mercantilism, patronage, slavery, and war, sharing power with other aristocrats did not work out so well.

Does Hispanic America need 20 countries to divide 400 million people? A European might see it as normal, but remember all these countries share a common language and religion. Today Hispanic America is overshadowed and sometimes dominated in the region by Brazil precisely because Brazil held together as one.

Unlike Spanish America, Brazil followed the path of managed transition. Portuguese Queen Maria I and her court escaped the Iberian peninsula during the Peninsular War and effectively moved the Portuguese capital to Rio de Janeiro in 1808, where the royal family ruled over both countries until Napoleon was defeated in 1815.

In that time, Brazilians got used to the idea of not being subservient colonists. When King John VI reestablished a parliament in Lisbon, he granted a fair amount of autonomy to Brazil. When Lisbon politicians later demanded the king return to the Portugal in 1821, he left his son and prince to govern Brazil.

When parliament demanded Prince Pedro submit to Portugal, he instead declared independence for Brazil. While it won its brief war for independence, the country remained an absolute monarchy under Pedro and Pedro II until a military coup began the country’s republican history in 1889.

That 70-year delay — 1889 in Portuguese America vs. 1822 in Bogota — helped hold Brazil together while leapfrogging the bloody chaos and caudillismo that characterized the learning curve of independent democracies in Spanish America.

A little ahead of his time, Simon Bolivar may have overreached. But let’s go back to Bolivar’s homeland of Venezuela.

Even if Leopoldo Lopez or Henrique Capriles win a rout in an election, will they be able to effect change? Will their administrations even perform as well as Fernando Belaunde’s second term in Peru?

Chavismo does not start and stop with President Nicolas Maduro. Party faithful make up the judiciary, legislature, military, the state oil company, and all the other ranks of government.

A Venezuelan judge recently sentenced Leopoldo Lopez to 13 years in prison for inciting violent protests in a trial international observers decried as a farce. In response to international criticism, Maduro said Lopez would become a Venezuelan Pinochet.

While I don’t believe Lopez would be capable of pulling that off, a Venezuelan Pinochet is the quickest route back to what would be considered a decent standard of living on Latin American standards if history is any indicator. Somebody who will dissolve congress, dismiss judges, and fire PSDVA workers en masse. Somebody who can rule by decree to privatize industry.

But why’s it gotta be an autocrat?

Peru’s privatizations weren’t easy. Despite the economic chaos and fiscal debt, a lot of people had fairly comfortable salaries in inefficient if not useless positions of employment. Cleaning house hurts many people, in the case of Peru across several industries. Venezuela would be even worse.

And while Venezuela doesn’t face a guerrilla insurrection, it does have what may be the highest crime rate in the world. Happy, bilateral politics and a revamped police force are not going to change that like some good, old-fashioned curfews and liberty restrictions.

And if those measures aren’t taken in a right-wing autocratic government, a good dose of fujimorismo to balance out the decade-plus of chavismo, I don’t know what Venezuela’s endgame looks like. A representative democracy in Venezuela with political parties passing bilateral legislation in good faith to privatize industry and introduce market reforms — it’s not an easy picture to visualize in Latin America.

Coup or Cuba, on the other hand, a Venezuelan Castro or Fujimori, that isn’t so difficult to visualize.