I owe the city of Bogota for giving me a love of cycling. Bicycles are the best way to see any city, and the only way to live in Bogota. I couldn’t suffer a life in Bogota without a bicycle. You can not simply jump in a taxi or bus to go anywhere at any time. If it’s raining there are usually no taxis. And the buses are packed at peak hours. The traffic is so unreal that neither makes quick progress. I recognized this as soon as I arrived in 2009 and acquired a bicycle from Mike Ceaser of Bogota Bike Tours.

He gave me an old beach cruiser whose handlebars broke off under my weight after a few months. But I was hooked on zipping around the city for the mid-range errands that are too far to walk, but too close to justify a taxi or bus. You see a city better.

Cycling isn’t only for mid-range trips. The Mick and I once went for a Sunday lunch out in Suba, which is quite a distance from Chapinero. Those are the trips where you don’t only see a city better, you learn it. I cycled out to Salitre City for an English student a handful of times, as well as an appointment at the Chamber of Commerce headquarters.

Cycling in Bogota is not only convenient, it’s an integral part of Bogota’s culture. Former mayor Enrique Peñalosa has become the global authority on urban management and sustainable planning due to his efforts to mitigate congestion and improve mobility in Bogota. Bicycling Magazine ranked Bogota the world’s third most cycling-friendly city, behind only Amsterdam and Copenhagen. To illustrate how much cycling is a part of Bogota, consider the story when my first bicycle broke down at a student’s home. The student was a corporate sales professional. He not only had the tools needed to take my bike apart so it could fit in a taxi’s trunk, he took it apart.

Bogota has Latin America’s most extensive network of designated bike paths, called ciclorutas. Before I acquired my first bicycle in Bogota, I hadn’t ridden a bike in over ten years. I wasn’t worried about riding, but I wasn’t confident in Bogota traffic, which is more aggressive that the average Latin American chaos. While the bike paths aren’t perfect, they make it easy for virgins to plunge into urban cycling.

I still prefer ciclorutas, but after enough time in Bogota I don’t hesitate to jump into street traffic with the buses and taxis. In time I grew rather aggressive myself. Going between buses on Decima, weaving between lanes in traffic. I rode through downtown Lima like a pro.

I rear-ended a taxi once at Calle 53 and Septima, which I blame on him for unnecessarily braking. I ran into a car’s side door once or twice, always their fault for pulling out from a driveway or sidestreet without looking both ways for pedestrians or cyclists. Those are always the drivers’ loss, not mine. Just move the bicycle around the car and keep on going.

Many pedestrians either don’t know or don’t respect the bike paths, so they walk in the bike path. If you are riding at 20 or 25 mph and a group of five or six students are walking side by side – the only way they walk, of course – you’re going to have to slow down or even stop because of their violation of the publicly-allocated cycling space. Most city cyclists whistle to combat this problem.

There is one cyclist who I used to see in Chapinero who has some kind of boombox or portable speakers attached to his bicycle. The crowds on Carrera 13 during rush hour would hear the blaring reggaeton over a half block away and move out of his way. I wonder how much time he saves per week with that tactic.

Some Bogota cyclists engage in what I’ll call ‘teaching lessons’. I was behind a rider on Carrera 13, the city’s most congested bike path to my knowledge, when she lightly hit a pedestrian from behind. I had admired some of this girl’s accessories on previous blocks, one of which was a bell. At the next corner, I asked her why she hadn’t used the bell to alert the pedestrians that they were violating the bike path space. She replied that the accident was “con intención” (on purpose). She taught him a lesson.

I hit a few pedestrians, none on purpose but none regretted either. One fella was standing still in the bike path in front of a gay bar on Carrera 11 just north of Plaza Lourdes. When you have a class near Parque 93 finish after 10 p.m., you want to get home. And going through Colombia’s gayest neighborhood just before the drug gauntlet in Plaza Lourdes and the crackheads on Carrera 13, I wasn’t about to slow down. Just as he decided to stop staring at the gay bar and go in, I blasted him going at least 10 mph, probably 15. I lowered my shoulder so neither I nor my bike would be knocked off balance or slowed down, and caught him flush on his shoulder. He caught the ground with his hands. I put my hand in the air, not looking back, to acknowledge the accident.

I hit a gomelo up on the Carrera 11 path at the river that leads to Virrey Park, just north of Zona Rosa. He and his two pals were walking side-by-side, blocking the entire width of the bike lane and more. In Chapinero, I would’ve slowed down (see Lack of Space below). But in the north, there is plenty of sidewalk and this was late at night, so empty sidewalk. I saw them at least a block away, and I assumed they saw me. I assumed the guy in my lane was going to move. Until the last moment I swore he was going to move, until I hit him in the shoulder, sending his man-purse briefcase flying.

Most pedestrians violating the bike paths’ space don’t result in wrecks or drama. For the vast majority of violations, the cyclist is inconvenienced into slowing to walking speed until the pedestrian realizes his error and moves, or the cyclist passes. By the end of my time in Bogota, for these instances I had developed the habit of calling out “¡Ubíquese!”, a Colombianism that literally translates to “locate yourself” but is used as “figure out where you’re at.” You can imagine how surprising it’d be for a Colombian to hear in a foreign accent.

In Chapinero, it doesn’t matter if every citizen in Bogota is aware of the bike paths. There isn’t enough space. Street vendors steal half of the sidewalk and the tens of thousands of daily pedestrians take the rest. You just can’t haul ass down Carrera 13 during decent people’s working hours.

See my article, Enrique Peñalosa and Congestion in Bogota for more on the problems and solutions for densely populated urban areas.

Moving back to a positive note on cycling in Bogota, let’s look at Ciclovía, which occurs every Sunday and public holiday. The city closes certain avenues to car traffic. La Septima fills with clean, healthy people. They cycle, skateboard, rollerblade, jog, and walk. It’s great for family-friendly people-watching. Bicycle repair stands sit next to vendors selling salpicon and other snacks every block or so.

The path starts where Carrera 13 meets La Septima, a stone’s throw “above” Hotel Tequendama, the National Museum, and the Santamaria bullring. From there it goes north on Kr. 13 until Calle 63, where cyclists cross Plaza Lourdes in front of the church to meet the bike path at Carrera 11. The path follows Carrera 11 until it ends at Calle 100. From south to north, this was where I was most likely to be found at any given time in Bogota. Take a trip and see my old stomping grounds. Watch the neighborhood change from gritty Chapinero to posh Chicó. 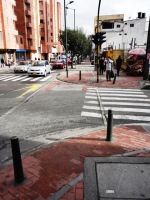 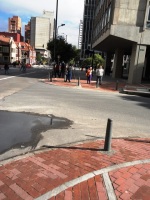 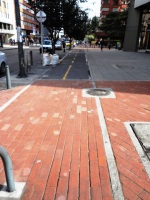