After seeing the bullfights in Bogota I saw another blood sport: cockfighting. Cockfighting is different than bullfighting in that humans don’t participate. The cocks are thrown together in a ring to battle to the death. These gamecocks are naturally aggressive. The training they receive is to allow humans to handle them, as they attack everything.

Unlike bullfighting at the Plaza de toros de Santamaria, a Bogota landmark, cockfighting isn’t as visible. I had to ask around to find a show. The Mick knew of a place near Chapinero. He led our same bullfighting crew to the neighborhood northwest of Calle 72 and Caracas (just a couple blocks from the recent assassination attempt on former minister Fernando Londoño that left 5 dead).

The place, called San Miguel, looked like a normal lunch restaurant. I wasn’t sure if cockfighting was legal or not. Maybe this was an under-the-table deal, for which we had to say the right words to get in. However, there was a (closed) box office to the left of the kitchen. Later, we saw uniformed police at the show. There was nothing discrete.

We ordered lunch and beers. Paul went out for a bottle of aguardiente. We were good and drunk when the box office opened. Tickets were less than 20,000 pesos. With our ticket we gained access to the back, where there was a bar selling snacks, beer, and aguardiente. Various Colombians were combing, trimming, and grooming their cocks.

We waited for what seemed like an hour before taking seats. Here’s a 20 second panorama of the pit: 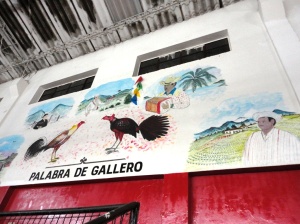 Then the fights began. There’s no ritual like in bullfighting. Cockfighting revolves around gambling. It’s a working class affair to get drunk and gamble on cocks. From what I saw, there’s no real handicapping either. In sports betting for example, you can study enough to get a good idea who’s going to win. The more studious sports betters can make a living as bookies. Cockfighting, on the other hand, is more like craps or Be Like Me (flipping coins) – pure luck.

Another difference in bullfighting, whether or not you like the idea, is that it’s genuinely entertaining. Cockfighting is genuinely boring. The cocks peck with their beaks, occasionally jumping and flapping their wings in an attempt to knock the opponent down and stand on him. Once standing on the other, he can peck away at will.

Even the quick fights are boring. We left before the show was over. This was a fast fight (hence the least boring):

For the faint of heart, cockfighting may be worse than bullfighting in one respect: no mercy. In every fight I saw, the winning cock had the clear upper hand for a long time before finally killing the other. The other just runs around the ring trying to escape while the winner pursues him, slowly pecking away until he can’t stand and killing him.

Here’s an 8 second example of that. I chose this video because the killing cock has white feathers, so you can see the blood under his mouth.

Paul saw a show in Puerto Rico where they attach razors under the cocks’ feet, which send blood flying when they step on opponents, and make for shorted fights. There was blood on the feathers in this show, but no blood flying. Paul wasn’t impressed with the cockfighting in Bogota.

Here are two more fights, each lasting the average duration of the cockfights I saw.

As I said, the show’s not worth seeing. The food, however, was delicious. I’ve been more than critical of Colombian cuisine and specifically ACPM. But these two plates demonstrate ACPM done right!