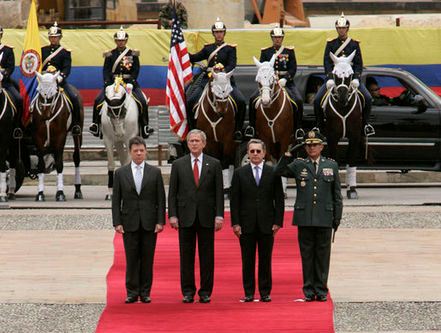 Uribismo is the policies of former Colombian president Alvaro Uribe. An uribista is a supporter of those policies. Uribismo on Wikipedia (translated from Spanish):

Democratic Security: Society participates in the war against narco-terrorism, and in improving the police and military. Democratic Security aims to eliminate all forms of terrorism, and to achieve complete state control over security.
–
Investor Confidence: Promote foreign investment in Colombia to create more jobs. Aims to position Colombia in the global economy and developing Colombia into a tourist destination. A strong state is needed for this, as detailed in the Democratic Security policy.
–
Social Cohesion: Improving quality of life for all. Aiming to bring a state presence to people and places far from the capital, which have served as a refuge for guerrillas and paramilitaries for years. Aiming to improve health care coverage, education, utilities, internet, and environment preservation. With Social Cohesion, inhabitants of remote areas won’t be tempted to join narco-terrorist groups.
–
State of Opinion: This makes no sense so I’m not translating it.

This is the official line defining uribismo. Who can argue? As with most political platforms, it’s specifically generic so it doesn’t alienate anyone.

I got a different explanation from a proud uribista. This isn’t the official line, and it’d certainly be disowned by Uribe. But this is how it was explained to me by Proud Uribista. And it’s probably closer to the heart and soul of popular uribismo.

As I said in Why Petro beat Peñalosa, I didn’t know anybody who wanted Santos for president (I met Proud Uribista after the election). But I once attended a party of mostly paisas. Uribe’s from Medellin. Carlos Castaño was from Antioquia, a Colombian paramilitary hotbed. The party’s banter turned political. Uribe hadn’t been disallowed from running for a third term, and these paisas were arguing whether he or Santos should be the next president. No other candidate was mentioned. They argued over who would be the biggest paraco. They wanted an ally to the paramilitaries.

Bogota has been far removed from the guerrilla-paramilitary violence that plagues the countryside and small towns, the “pueblo.” But all Colombians can relate to cocaine-funded enemies of the state. The hunt for Pablo Escobar was inarguably helped by the extrajudicial killings of Los Pepes. The spirit of uribismo, according to Proud Uribista and the paisas from that party, seems to be in that same vein of vigilantism.