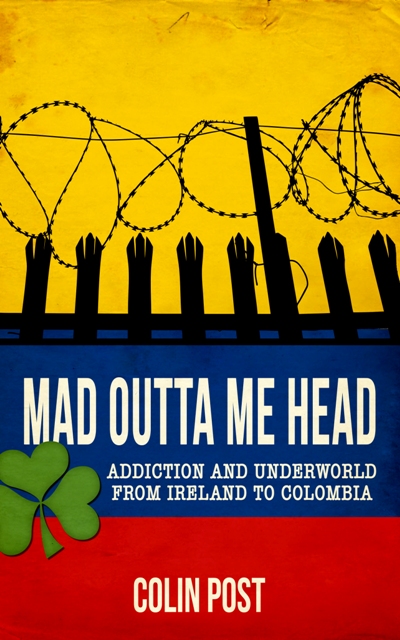 Mad Outta Me Head follows the life of Christopher Kavanagh and his love of drugs and alcohol — getting “mad outta his head.” From Ireland’s industrial schools and penitentiaries to the heroin epidemic in Ireland, Christopher paints a vivid picture of Dublin’s underworld in the 1970s and 80s.

Christopher’s drug addiction brought him to Bogota, Colombia, where he served three years in Colombia’s largest prison, La Modelo. There he befriended guerrilla insurgents, drug cartel assassins, and many more from the rank-and-file of Colombia’s underworld — mafiosos, killers, thieves, conmen, and more.

In 1989, Christopher was released onto the streets of Bogota at a time when TIME Magazine called it the world’s worst city, the capital of the world’s most dangerous country.

“A portrait of a man whose drug- and alcohol-fueled existence strips the romanticism any traveler may have of the criminal underworld.” — The Bogotá Post

Watch Christopher tell some of the stories from the book:

Add Christopher on Facebook (he may not accept you for a few weeks): facebook.com/christopher.kavanagh.79.

See Christopher’s Reddit AMA, which was on the first page of Reddit for a whole day: redd.it/2cicp4.

Christopher dug these old pictures up from the 1990s. For slideshow viewing, see the Christopher Kavanagh circa 1991 album on the Expat Chronicles FB page.

The Michelin Man Goes to Jail