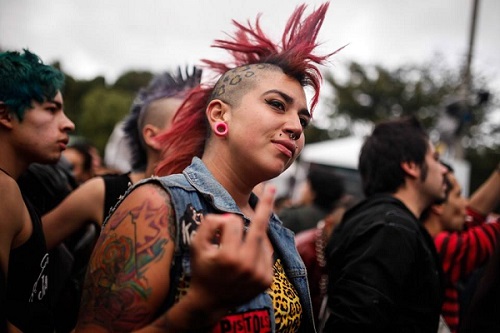 Alternate Title: Don’t Let the Smooth Taste Fool You, These People Hate You

When you first visit Latin America, one thing that strikes you is how friendly the people are. You converse with the taxi driver and the shopowner, you ask for directions from anyone on the street.

Friendliness to strangers is one of Latin America’s most attractive qualities to gringos. But in time you learn it’s superficial, skin deep. Beyond small talk, these people don’t really like you. In fact, they hate you. They’d like to get whatever then can from you and never think about you again.

My Arequipa in-laws spend their entire inside their homes with windows shut. They have parties for people who have at least one of the same names, or someone like me who married in. Anybody else would be unwelcome.

During the original Reddit AMA with The Mick, he responded to some question about Colombia like this: “People don’t give a damn about their next-door neighbor.” I wanted to qualify it at the time, and tried to get him to expand a little, but ultimately I let it go as is. And of course all the gringo experts jumped on him, saying that was just Bogota or other nonsense.

Back in 2009, during my early days as friends with The Mick, there was almost an article titled “The Mick’s Little Acts of Terrorism.” He had just gotten new neighbors who practiced their musical instruments at all hours of the night. So he would leave piles of used shit paper on the ground outside their door with the floor just in front of it greased with oil so they would fall. He had a different trick every week, and I thought he was a little insane.

In time I found that’s not too uncommon here, to be mortal enemies with your neighbor. It’s one thing to have that in suburban America where the neighbors live 20 yards away or more, and you rarely see them. But in Latin America you share a wall and you see them every day.

I recently had a problem with irrational neighbors of my own, as well as mad psycho bitches trying to break up our marriage over the years. Over the last few months I watched my friend Richard McColl vent his own frustrations on Facebook. He penned a full account of his psycho neighbors for Expat Chronicles.

These are my neighbors from hell.

My wife and I started off on the wrong foot with them as we undertook a vast remodeling of our new place to make it livable for a family of three. As the ceilings are not so high, we decided to put in spotlighting to throw decent illumination on to our sitting room. This required some drilling in the ceiling.

Easy enough. Or so, we thought.

Our first architect took us for a ride, (for a list of those not to employ in Bogota, email ColombiaCalling -AT- gmail!) overcharging, cutting corners and basically not doing what was expected. Original workers dismissed, we found a new team of electricians and builders who discovered the slack and frankly dangerous wiring that had been left by the first workers. We had to go through the process of drilling again.

We apologized to our neighbors for this work overrunning its expected course by a couple of months and asked for their patience. They were demure and polite and suggested that we consider responding financially for the damages to their apartment due to the effect of the drilling.

We sent our foreman and he estimated that 90,000 pesos ($32) would correct any cracks, sanding and painting the damages. It would never have crossed my mind, were the roles reversed, to charge such a paltry sum from my neighbor. But in good faith and the spirit of tranquil horizontal living, I was happy to do so despite my reservations regarding how much actual damage from vibrations had affected their home. My engineer friends also expressed surprise since the superficial cracks in the upstairs apartment could, in no way, have come from our work. Most likely they resulted from poor construction and frequent tremors.

Then Don Fernando from upstairs emailed an “estimate” from his builder. Included, yet not priced in, were the stipulations that Don Fernando’s family would have to be put up in a hotel for the redecoration of their apartment, their furniture and belongings would have to be moved by professionals and placed in storage and an additional worker hired to oversee the job. He asked us to pay 5 million pesos ($1,765) to get started, which would not their holiday at our expense.

We ignored it. Then the court citation arrived.

I had never seen one before. I thought it was just a warning. My wife explained that this was a big deal and I would have to go before a judge. The judge saw nothing in the complaint and didn’t even show up for the hearing. Undeterred, our neighbors filed another complaint. This is known as a “querella” here, literally a “quarrel” (“extrajudicial conciliation” in Peru). Then another querella citation arrived, pointlessly clogging up Colombia’s already strangled judicial system.

Accusations were thrown back and forth, Don Fernando’s wife – presumably a keen fan of the melodrama offered by local telenovelas – would routinely plunge her head into her hands and sob, pleading with the judge.

“For the children, for our asthmatic children,” she implored.

Oh, now I understood that their home-schooled, imprisoned children couldn’t be present for the redecoration. I could have brought it to the judge’s attention that Fernando y familia actually have a family pet, a very furry and adorable golden retriever. But, I kept quiet. I also remained quiet on the fact that their home was filthy each time we had been upstairs to review the “damage.”

No conciliation was reached and a second hearing was called, a further encumbrance to Colombia’s judicial system. After more insults and a ridiculous threat from Don Fernando of pressing criminal charges, an agreement was reached that an engineer from the Alcaldia de Bogota would come and conclude whether or not our drilling could have created such superficial cracks in their home (balanced on the side of a mountain in a frequent tremor zone). The Alcaldia’s engineer was decidedly unimpressed.

Realizing their case was getting nowhere, Don Fernando started seeking out other ways to make our lives miserable. The easiest target for them was our garden renovation and paving project. Every time our landscapers switched on a tile cutter to fashion a neatly sized brick or tile to fit with the layout, the police were called to investigate the “disturbance of the peace.”

We received visits from Bogota’s finest five times in one week in December. Having seen our documents supporting the renovation of our garden, the police logged Don Fernando’s number in their devices so as to ignore his continual phone calls.

The upside to all this of course is that we are now known and respected by the local police. On the downside, our neighbors are bat-shit crazy, unaware or uncaring that Bogota’s police have better things to do. And jealous of our beautifully renovated child-friendly apartment and garden.

I am certain that home-schooling works for some families and, given the exorbitant costs of private education in Bogota, it can undoubtedly relieve some pressure on the family purse. But I may question the practice of keeping two small children inside a small apartment, home-schooled with no other children or outdoors play time save for some scant minutes in the building garage on their bicycles with the maid.

Having unintentionally listened in to some of the family disputes between Don Fernando and his missus, the missus and her children, the abuela and anyone, the children between themselves and the children and their parents, I have a theory that the glue binding the family together is their hatred and envy of us. And so, the saga continues with our neighbors from hell.

Richard McColl is a journalist and hotelier based in Bogota and hosts a weekly podcast called Colombia Calling available on all streaming sites.

I would only add that this story and brief anecdotes before illustrate the unfriendliness in Latin America on a micro level. On a macro level it manifests itself in a deep lack of trust, hindering industries such as e-commerce and charitable giving. Any and every politician is disapproved of, as are police and other public servants.