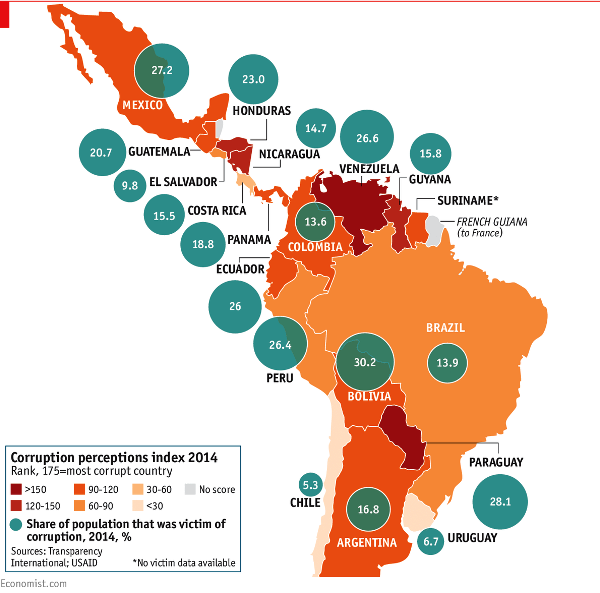 I recently wrote about the shrinking size of families in Latin America. There’s another change underway: people are getting pissed about public corruption.

I explain a few quirks about Latin American politics to regional neophytes. One big difference between Latin America and our gringo countries: when some gringo has dreams of being rich, he generally goes into finance or banking. Some become entrepreneurs and others go to work in Corporate America. In Latin America, on the other hand, the young men who want to be rich – those who are motivated by money – go into politics.

It’s quite the opposite in Gringolandia, where a life in government and public service may bring power, but it does not attract those motivated by money.

Another point to remember in Latin America: any public work whether it be a bridge, highway expansion or even repairing a damn pothole – came with a kickback to the politicians who awarded the job. The kickback varies, but assume an average of 25 percent. Sometimes it’s more, sometimes it’s less, but it’s always something in cold hard cash.

That’s why the stories in Non-Profit Work in Colombia: Easy Money? came as no surprise to me. But that’s changing. Something’s in the air. Latin Americans are getting pissed, and they want change.

The trend’s been underway for years, but 2016 year was a monumental year in Latin American corruption given two global news stories: the Panama Papers and Operation Carwash. The Panama Papers was a document dump from a Panama-based law firm which helped the world’s wealthy create shell companies offshore, mainly to evade taxes but also to hide illicit revenue. Carwash was a Brazilian-grown graft and kickbacks scandal in countries around the world, but mostly in Latin America. And don’t forget FIFAgate.

Brazil impeached former President Dilma Rousseff, who served as chair of the board at Petrobras, the company at the heart of the Carwash scandal and a leader of the Workers’ Party which benefited most from kickbacks. Former President Luiz Inacio Lula da Silva, previously a darling of the left which was too sensible to back Hugo Chavez, has been charged with corruption and will face trial.

Argentina’s former President Cristina Fernandez de Kirchner has also been charged and will likely be convicted. According to the article:

The judge, who ordered about $640 million in Mrs. Kirchner’s assets be frozen …

That’s all I have to hear … GUILTY! What do you think the average Argentine thinks when she hears that? Want icing on the cake? Kirchner Official Caught Burying Millions Outside Convent.

In Colombia, several officials in the government of former President Alvaro Uribe are being arrested in connection with the Odebrecht bribery scandal. Odebrecht, a Brazilian construction firm, was at the heart of the Carwash scheme.

Odebrecht is cooperating with investigators in Peru, who could jail up to three former presidents. That would be each one since the fall of strongman Alberto Fujimori, who is in prison for authorizing death squads. Alejandro Toledo will probably be arrested in the next month. Two officials in Alan Garcia’s government have been arrested, while the dragnet closes in on Ollanta Humala and Nadine Heredia.

In Panama, officials former President Ricardo Martinelli’s government are being charged, and he may end up on trial too.

It’s pretty clear something’s in the air. That sentiment is best illustrated with a story from Peru two months ago, when the opposition-controlled Congress sacked a respected education minister who probably wasn’t corrupt at all.

The move was panned by Peru’s establishment press as an abuse of power by Keiko Fujimori’s party which is still pissed about losing the presidential election but which dominates Congress. But I saw something else in a poll that showed 52 percent of Peruvians wanted him sacked over what was clearly not his fault.

Peruvians are PISSED, and they don’t care if it’s your fault. If it happened at all during your watch, you’re fucking guilty. That’s how I read the public sentiment. The next education minister will surely make sure there are no inflated contracts to officials’ friends and family. Because he knows he will go down if something goes wrong in his house.

Yet the region’s commitment to root out the rot in business and politics seems real and vibrant. Peru has announced a special investigative team to look into corrupt practices. Colombian prosecutors are scouring contracts, and a senior minister for Panama President Juan Carlos Varela announced a probe into Odebrecht’s contracts …

This is not all the work of imported gringo ethics, however. If Brazil became a byword for graft and corporate malpractice, it also has become a trendsetter. Operation Carwash, the storied three-year investigation into corruption at Petrobras, owes its success not just to a maverick judge or courageous prosecutors, but to solid institutions and laws such as the 2013 anti-bribery law.

“What we’re seeing now is a kind of competition among countries named by U.S. prosecutors to take down corruption at home,” said Alejandro Salas, a Latin America analyst with Transparency International. More remarkably, Salas said, countries that rarely saw eye-to-eye are working in tandem, most recently to build a joint task force to investigate corruption, under Article 49 of the United Nations Convention Against Corruption …

What’s different is that Latin Americans no longer seem willing to look the other way — consider the outrage over corruption that toppled an old-school crony politician from office in Guatemala and chased a tainted former leader of El Salvador into exile last year. The ripples set off by Odebrecht’s crimes are stark proof that civil society’s anger at thieving at the public’s expense has punctured the certainty of a once untouchable political class and their corporate sponsors, many of whom are now behind bars, were forced to flee, or facing trial. That kind of civic conviction that can’t be imported.

Or as I say it, people are fucking pissed.

There is one glaring and unsurprising exception in the improving corruption scene in Latin America: Venezuela. The Bolivarian Republic ranked 166 of 176 countries in Tranparency International’s 2016 Corruption Perceptions Index, by far the worst in Latin America and even below countries like Congo and Zimbabwe. Venezuela was Odebrecht’s largest market outside Brazil, but the government and state-dominated media aren’t interested.

One thing is clear though: even if 2016 marks the start of a shift towards more active enforcement by authorities in response to these public demands, there is still a long way to go.

Still, times they are a changin.

In Peru, it’s possible that all three presidents who followed Fujimori could go to prison. See the corruption tag on Peru Reports.