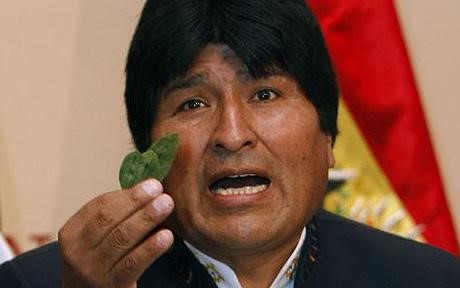 Three years ago I lived in Arequipa with a Swiss fella who loved climbing mountains. He organized a group to climb Misti. It’s a 2-day excursion. You camp at the halfway point so your system acclimates to the altitude.

On day 2 the Swiss fella couldn’t continue. He had altitude sickness and stayed at camp. He’d climbed several mountains in the Alps, and he was fit. He believes he couldn’t go on because he didn’t bring any coca.

I, one the other hand, brewed 2 liters of coca tea to drink in addition to water on the recommendation of a Peruvian who’d mounted Misti twice. It was a bitch carrying a 2-liter of coca AND a 2-liter of water in addition to all my other shit, but I never even noticed the altitude. Only the cold.

Most Americans believe the coca leaf is the same as cocaine. The average American has not traveled outside of the US, let alone the Andean region of South America.

Yes, one of the coca leaf’s 14 alkoloids is used to make cocaine. But a 1995 World Health Organization report confirmed that when chewed, coca has no side effects. It doesn’t yield a “high.”

Cocaine is made from extracting the alkaloid and mixing it with sulfuric acid, kerosene, and methyl alcohol. The result is cocaine and its equivalent, crack.

Recently, my former U.S. Ambassador Dan Simpson made a trip to Bolivia and suggested ideas for improvement in U.S. foreign policy. In his article, Befriending Bolivia, he compared the coca leaf to cocaine:

Prior to being elected president for the first time in 2005, Mr. Morales headed Bolivia’s coca-growers association — coca as in cocaine, constituting an estimated 10 percent of Bolivia’s economy. Ah, Bolivia.

While I have no idea of his intent, he made a misleading statement – if not a lie – by framing Evo Morales as advocating cocaine.

Brief History of the Coca Leaf

The coca leaf has been a sacred plant in the Andean region for hundreds of years. And throughout history, there has always been a culture vehemently opposed to it.

When Pizarro and the Spaniards arrived in Peru in the 1500’s,  they banned coca. They withdrew the ban when they realized their Incan slaves couldn’t work without it.

In the mid-1800’s, cocaine was recognized for its stimulating capability by German doctors and it became a popular, legal pharmaceutical drug. It was later banned.

[O]ne of his products made him rich and famous: Vin Mariani, a Coca wine tonic.

Mariani gained quite a bit of fame with his drink. It was  cherished by royalty in the United States and Europe.

Admirers of Vin Mariani included Queen Victoria, The Pope, President McKinley, and Ulysses S. Grant, who, dying of throat cancer, drank it while writing his memoirs.

According to this 1988 New York Times article, coca leaf is still used in Coca-Cola’s secret recipe, kept in a vault and known by only a select few employees. A Coca-Cola supplier is the only authorized American importer of coca.

Benefits of the Coca Leaf

Coca has been used for years for energy and to deal with altitude sickness, a healthy alternative to coffee.

Should Coca Be Legal?

Cocaine trafficking to the United States puts a lot of money in the hands of bad people. The narco money comes from American and European demand, where artificially-inflated prices (due to mandatory minimum drug sentences) make the business so profitable.

On the other side, the coca leaf provides sustenance to poor laborers and plays an important role in Andean culture.

Why does the coca leaf have to be grouped with cocaine when they are two different things? Bolivia asked the UN to separate the coca leaf from cocaine in 2009 , but it was rejected by 17 of the 184 countries that were part of the treaty. Less than 10 percent was enough to impede the change.

Can we develop international regulations for production that circulates the coca leaf as a healthy energy supplement and mood enhancer? Powerful forces want to prevent this.

I’ll add that George Washington, the Godfather of the American republic, was a fervent advocate of cultivating hemp for its fiber, which made strong rope and clothing. The unrealized benefits of hemp were one downside of the failed drug prohibition, similar to the demonizing of coca.

See my Narcoterrorism article or My War on Drugs Rant.