In June 2011, Colombia Reports included Expat Chronicles with the other Colombia blog feeds on its website. Controversy immediately ensued when my first article to appear involved a lot of snorting coke. In fact, my whole front page at that time had stories about coke, bribing cops, cheating Colombianas, or something offensive to bleeding-heart types.

See that FB thread arguing whether or not Expat Chronicles should be linked from CR.

I published an article on the ordeal, Colombia Reports Controversy Part 1. From that article:

I told the managing editor I understand if he wants to take my posts out of the feed. The first one caused backlash, and it’s going to happen as long as I’m writing. I’m so sure of it I put “Part 1” in the title of this piece.

Soon after that thread they created a CR FB group to discuss its format, policy, and complaints. For three months Expat Chronicles articles were linked from the CR site and FB feed with no problems. Then I published How to Break Proper-Actin’ Latinas. It’s a quick read if you want to catch up. Here are the bullet-points:

This sparked the second Expat Chronicles controversy on CR (6 months ago, just a couple months after the first controversy). Here’s how the FB thread started:

Yesterday, a Colombia Reports “fan” was offended by one of Expat Chronicles’ posts about women. These posts appear, because all blogs on Colombia appear on the facebook page. Do you think we should keep the blogs on CR’s facebook page or remove them?

As opposed to cocaine and partying, this thread argued the treatment of women. Unfortunately, the first guy to complain and primary plaintiff, after arguing back and forth several times, deleted all his comments except the last one. So the thread may not make sense at a few points where it’s missing this gringo’s feminist arguments. Here are screenshots as of today: 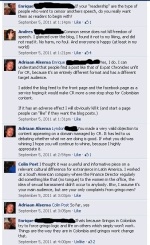 Note: I’ve blotted out last names. If anyone would like to be even more anonymous, email me through the FB account. I’ll respect your wishes and I’m nothing if not accessible. That also goes for anybody who left a comment anywhere on this site, just email me if you’d ever like your name / link removed.

This controversy played out nicely in that I didn’t have to argue. My arguments were made before I could make them. First, let’s look at the female comments from my original article. This one from Maria:

I actually enjoy reading Colin’s stories and hey if it works for him… good. He’s not re-writing the Constitution here, it’s a blog and it’s entertaining… Even though I am one of those ‘proper’ Colombian girls 🙂

Here’s my favorite, from Judith:

God, those commentators over on the Colombia Reports FB are a bunch of whiny little bitches.

There’s nothing over-aggressive or rapey about those tactics as long as the girl has shown clear and sustained signs of interest. Most women I know would react positively to a man she found attractive acting in such a manner.

And here’s the third and final female comment, from Jessica:

There were NO female commenters on the Colombia Reports Interaction thread. Not one female voice – Latina or gringa – complained. Why? Maybe it has something to do with an inarguable aspect of Latin culture: traditional gender roles. Samuel makes this point:

ah, the glory of Latin culture, where the women require the men to be MEN.

I like it. It fits a lot of my theory. I wonder… what do you think of the machistas, the guys who run all the macho bullshit? Latina women say they don’t like machistas, but it seems that they sure do respond positively to most of it.

And they’ll damn sure eat a guy alive, if he doesn’t have a good spine and brass balls.

I would imagine this sort of behavior where they wont kiss is so that they dont feel like sluts or come off like sluts, so as long as its “forced” they don’t have to be responsible. Its all a game, but I get it. It also weeds out the spineless dudes. In fact, most romance novels, until more recent years, all involved the guy taking the girl forcefully at first, like a captive or outlaw and having his way… because not only do girls all have fantasies about that, but then they can enjoy it without guilt, because the ‘poor girl’ who was captured had no say in the matter and wasn’t complicit.

Watch the first season of Mad Men and your jaw will drop at the sexism just last century. Feminism has empowered women in magnificent ways. In some ways, however, it’s gone too far. Feminism and Hollywood morals have culturally neutered gringo men. Look at gringa women who go after Latin men. These gringas crave the aggression they’re not getting from the gringo pussies in their worlds.

Here’s one from Enrique on the Colombia Reports Interaction FB thread:

Gringos in Colombia try to force gringo logic and life on others which simply won’t work.

This comment spawned a new saying of mine: “Keep your gringo values in Gringolandia.”

We obviously want to export some gringo values: good governance and the rule of law, customer service and better business practices, egalitarianism, reading and writing, etc. But don’t try to change the entire culture, especially where gringo “progress” went too far.

I’m a product of Gringolandia and Hollywood morals. Almost until I completed university, I was gentle with women. I didn’t start playing rough and manhandling until well into my 20s. I learned that spanking, pulling hair, and choking women during sex makes them fall in love. I don’t know why, but it does.

My St. Louis buddy Joey got a culture shock in Bogota. The main reason I wrote How To Break Proper-Actin’ Latinas was because of how surprised he was whenever I did it. He saw it work with three girls in two weekends. His shock bordered on hating. He tried calling me out in front of other gringo expats a few times, none of whom cared.

Joey’s been in Bogota over six months now. He has a beautiful, estrato 6 girlfriend. He has recanted his previous hating. He told what he’s been doing to his girl sexually. He slapped her once, and she asked for it harder. So he smacked the shit out of her. He smacks her during sex, and even fish hooks her with his thumb. She loves it. She’s sprung.

So there may be something about Latin culture, or Latin women, that will change you before you change them.

In Colombian author Gabriel Garcia Marquez’s Love in the Time of Cholera (great book), there’s a costeña woman who’s raped as a young girl. She confesses that she loves the stranger who raped her, and he’ll always have her heart. No matter how much feminism or cultural forces try to change our psychology, women’s sexual experience is very masochist. I’ve thought about what it’d feel like to be penetrated, and I can’t imagine anything pleasurable about it, even with a little one. And women like it hard with big ones. There’s an inherent submissiveness and masochism in female sexuality. No gringo progress or feminism can change that.

I’ve never raped a woman nor been accused. I’ve never hit a woman intentionally. I’m not abusive. But I’m not delicate or pretty and never will be.

I don’t only use  that tactic because women like it. There’s another reason that didn’t come up in the comments. Forcing the issue also serves to let me know where we stand. As have most men, I’ve been sidelined into being “friends” by playing nice with women. A heterosexual man and a heterosexual woman can’t be just friends – not hanging out alone anyway. One will eventually want the other. If she wants him, the man will either give it to her or cut her off as a “friend.” Women, on the other hand, will string a guy along forever if he keeps hanging around. She’ll even convince herself they’re friends. These are the women who say things like, “All my friends are guys.” Yeah, right.

Years ago I got strung along for a few weeks and decided it’d never happen again. I take the risk of getting slapped or pissing a girl off with my tactic. Either one’s fine with me. At least I won’t waste any more time. Go find another friend.

I’ve read this guy’s blog and while I find some of his entry’s interesting, the profanity and content doesn’t quite “go” with what I though CR was all about….just sayin’.

And I got significant traffic from CR’s huge readership, but I can’t complain because Expat Chronicles is still goin’ hard, and traffic’s up since getting removed.

Screenshots of the first CR FB controversy (some comments were deleted from this thread as well): 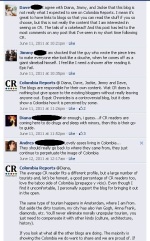