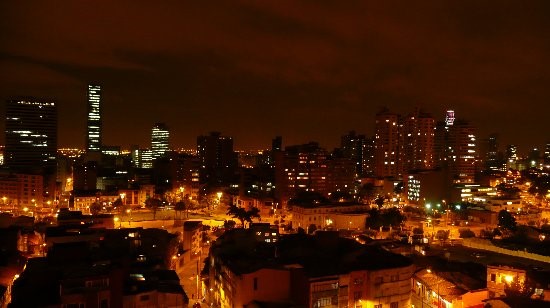 Joey is a good friend from Chicago. When he visited Europe, he wrote an article for this blog. He recently decided he wanted to come to Latin America. He wasn’t particularly hot on Bogota or even Colombia, but he knew I was here and could help him. So he came to Bogota in July.

Joey’s flight arrived around 9 pm. As soon as he exited the terminal, I pointed him to the outdoor dollar exchange. Change ALL your dollars! During the transaction, I produced a pint of red Nectar aguardiente from my pocket and two vasitos. I served us right there at the dollar exchange window. Before leaving the dollar lady said to Joey in English, “Careful.”

After getting a registered taxi, we started toward Joey’s indefinite temp home in La Candelaria. In the taxi, I produced a gram of impressively pure Colombian cocaine. I took a key bump to illustrate it’s OK to snort in taxis. He couldn’t believe it. He was hesitant to take one himself.

This is the only way to pick friends up from the airport in Colombia – with a bottle and a gram.

We started drinking at the hostel before hitting Doña Ceci’s for a round, then made our way to Quiebracanto (it was a Wednesday). Joey bartended in downtown St. Louis, so he’s used to unsafe streets. But downtown Bogota at night is a different world. Especially after midnight, everything has a sketchy vibe. Running around in those streets, drinking and snorting, keeps you on your toes.

Joey’s second day I took him around North Bogota to meet potential English students. In Chicó’s clean, developed, safe feel during the beautiful daylight hours, Joey saw a stark contrast from the previous night of sketchy streets and drugs.

After a few hours meeting rolo professionals, we jumped on a bus heading South through Chapinero. I jumped from my seat when I saw The Mick on his bicycle. “Joey, you gotta meet this guy,” as I rang the bell for the bus to stop. We had to run, but we caught up with The Mick. He was on one of his terrible benders. After pleasantries he said, “How ’bout a drop of whiskey?” Joey and I were still hung over from the night before, but we went to the liquor store for Something Special to get it started.

Joey had read much of this blog before coming, so he already knew of The Mick. He was intrigued at the Irishman who did four years in Colombian prison in the 80s, even shanking another inmate.

After getting whiskey, The Mick led us to one of his favorite rock bars. He hangs out there for the music. He does not hang out there to meet underage boys, which this bar is somewhat known for. The manager rides the local boys who want to be ridden. He gives them free lunches and drugs in return for their favors. I explained this to Joey over our first round of  beer, while he took note of all the boys in high school uniforms with tongue rings and lip piercings. It looks like the manager buys them oral piercings too.

If the previous night drinking in downtown Bogota didn’t do it, this was Joey’s wake up call. Not in Missouri anymore, he said “That’s fucked up.” I explained him my vice theory to understanding Latin America – especially Colombia. Think of every vice or anti-social behavior in the world. For every one, there is a percentage of offenders in the States. In Latin America (and especially Colombia), that percentage is higher. Degenerate alcoholics, degenerate gamblers, thieves, killers, con men, whores and whoremongers, drug addicts and drug dealers, wifebeaters – everything. Across the board, each one comprises a higher percentage of society than in the States.

That analogy helps. So did some of The Mick’s jaw-dropping stories of the seedier side of Colombia.

We kept drinking in Chapinero until night fell, when we found ourselves in the Hippies Park (Calle 60 and Septima) with a caleña chick. This girl took a liking to Joey and it was quickly evident that I was the third wheel. It wasn’t late, but it was night-time in Chapinero and they were looking to me to answer, “What are we going to do?” I hailed a taxi and directed him to Amarte, a sex hotel nearby. Joey had no idea where we were headed, even when I walked them in to do the talking. I told him to give me money, paid with it, and left him to the hotel staff. I went home, smiling at having dropped Joey off at the sex hotel within 24 hours of landing in Bogota.

The next day was Friday. I had brothel tours all weekend. Friday night’s client was staying in a hostel nearby Joey’s. He had a late night flight, so we met up around 8 pm. I told him I was “training” Joey. He was Nigerian – my first African client – in Bogota for work. He was also the brokest clients I ever had. His budget was about the least you can get it done for without resorting to streetwalkers.

Because of his lack of funds, I decided against taking a taxi into Santa Fe. If you speak Spanish and know the rules of Latin American cities, you can easily get along without getting robbed. You only get in trouble if you ask for it. Going to Santa Fe isn’t necessarily asking for it, but walking there is borderline. But we were three – one of whom was black – and it wasn’t too late. We should be fine. So Joey’s third night started with a hike up Decima, down Calle 22, and into the devil’s lustful den.

They call Las Vegas “Sin City,” but it ain’t got shit on Bogota or Medellin. I don’t care where you’ve partied in Gringolandia, you haven’t seen much if you haven’t been to a Colombian zona de tolerancia.

On weekends I usually refuse to take clients to Santa Fe because it’s so crowded. The whores are getting ran up in all night long. If the client wants a hot one, you almost have to grab her as she’s coming back from the bedrooms. But this client was broke and in a hurry, so Santa Fe was the only option. We crowded into a small table. I usually didn’t drink on tours, but this was Friday night and dude was in a hurry. Joey marveled at the scene, at how easy it was to buy sex, at the show and the wild drunkenness, and how quickly we were in and out of there. Then we went drinking at downtown salsa spot, Goce Pagano.

The next night, Saturday, I had a client from the opposite end of the spectrum. He was staying at La Fontana (arguably the nicest hotel in the country) and his primary concern was safety. These are the preferred clients for a few reasons.

We picked the client up and took him to a high end brothel near Parque 93. Joey was “training” again. The client bought us beers, plus whiskeys for not one but two whores. He settled on one and I negotiated the deal. When he finished he invited everybody to another round. In two nights, Joey went from one of Colombia’s seediest red light districts to its poshest. After dropping the client off at the hotel, we went straight back to the Park 93 whorehouse to get my commission. Then I invited Joey to a night of drinking guaro with two Colombian chicks we’d met in Zona Rosa.

Sunday we met up for lunch with five-day hangovers. He started bitching about money. He’d come down with almost none, spent most of it, and didn’t have a job yet.

Joey, I said, it’s time you meet the deported niggaz. I took him over to Dopeman‘s. I’d hinted at this back in St. Louis, but now I told him in exact words. Joey, you’re right in the heart of all the gringo tourists, many of whom want drugs. I know a few Colombians who sell drugs to tourists, most are horrible. They triple the price on shit quality / quantity. And if a gringo goes to one of those sketchy street hustlers, he may get robbed. You’d be doing them a favor, and a valuable service to Bogota tourism by keeping gringos safe. By simply doubling prices, you’ll clean up. Just keep a low profile, especially with hostel staff. And the gringos will come back.

He was hesitant at first, but it ultimately proved an income stream important enough that he refused to move to Chapinero a few months later. He’s since making enough clean money and quit hustling weed and coke to tourists. It was a stepping stone.

At Dopeman’s, it was a full house as usual. Joey gets along with the deported guys, but in time he became a nagging voice against hanging out with them so much. In his words, “It’s just a matter of time before something fucked up happens hanging around those guys.”

Joey’s first week was not a Lonely Planet, Trip Advisor, or Rated G look at Bogota. It was an Expat Chronicles intro to Bogota:

After a few months in town, Joey and I sat down to a roasted chicken dinner (pollo asado). We ordered a half-chicken, and when it arrived I was like a proud dad seeing his son learn the ways of the world. When our platter arrived, Joey immediately threw the plastic gloves aside onto the table, followed by the arepas. He proceeded to eat the chicken with his fingers. A real gringo and white man!

P.S. If a gringo eats chicken with gloves, give him a slap for me 🙂